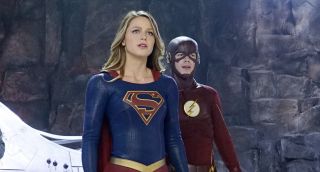 When it comes to small screen superhero action, The CW's shared universe of Arrow, The Flash, and Legends of Tomorrow has proven a worthwhile go-to for many fans. The network recently acquired CBS' Supergirl - whom The Flash had a crossover with earlier this year - which fueled speculation that the Girl of Steel may feature in CW's annual DC crossover event.

CW President Mark Pedowtiz confirmed those plans at the CW Upfronts; "Next season, Arrow, The Flash, Legends of Tomorrow, and now Supergirl will join forces in our annual crossover event, our biggest ever". The announcement was accompanied by a sizzle reel mashing up footage from all four shows.

The prospect of seeing all these characters join forces is as ambitious as it is exciting. The world which The CW have built is impressive, and previous crossovers have been entertaining, but co-ordinating four different shows will doubtless be a logistical and narrative challenge. Here's hoping they can pull it off.