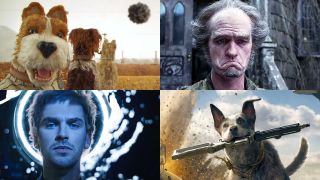 1. Far Cry 5 here, and now all the weird stuff is coming really coming out

With all the talk of Far Cry 5’s controversial US setting and religious cult, people kinda forgot it’s a Far Cry game at heart. That means hidden weirdness in abundance. All of which is coming out now the game’s being played and people can discover it all. Things like a weird haunted house, a sci-fi gun that liquidised enemies and a mission that seems to have you trying to track down Donald Trump’s (alleged) pee tape with references to yellow brick roads and wetting the bed. Then there’s some lower grade weird, like a mission that has you rifling through dog poop for a key and some trippy stuff we don’t want to spoil. Best of all there’s an Easter egg that suggests recurring character Hurk is the actual same Hurk from all the previous games, not a different version each time. Leon Hurley

2. It's time to grab a bargain in the PlayStation Store, Nintendo eShop, and Xbox Games Store Easter Sales

Easter is almost upon us, and if you want a new game to play as you chomp through your chocolate eggs then you're in luck, as all your favourite consoles are discounting prices through their online stores… unless you're on PlayStation 4 in the US, which evidently didn't get the Easter sale memo. Sorry. I've selected some top deals on great games, but if you want to see the full selection then follow the links at the bottom.

On PlayStation 4, you can pick up The Witcher 3: Wild Hunt - Game of the Year Edition for just £15.99 (54% off), which includes all DLC plus the Hearts of Stone and Blood and Wine expansions for many hours of monster slaying adventures. If you've enjoyed the recent Tomb Raider movie, you may be interested to know the 2013 Tomb Raider: Definitive Edition game it was based on is available for a miniscule £4.99 (80% off).

Xbox One owners can grab Forza Motorsport 7 for only £29.99 / $35.99 (40% off) and experience one of the greatest racing games of recent years, which is also a graphical treat on Xbox One X. Shooter fans can bag Battlefield 1 Revolution for a mere £22.00 / $24.00 (60% off), including all four themed expansion packs for the ultimate online multiplayer team battles. Iain Wilson

What: Easter Sales
Where: PlayStation 4, Switch, and Xbox One stores
When: Now

3. Destiny 2 has just had its most important update to, er, date

There’s no getting away from the fact that Destiny 2 is repeating all the mistake of the first game. Just like Destiny 1 - a game that didn’t really hit its stride until year 2 - the sequel is failing to hit the mark with players, forcing Bungie to make changes and adjustments to get things right. What’s being called the ‘Go Fast Update’ is the latest attempt by the studio to reverse a falling player count and please the people sticking with it who are less than happy. As the name suggests, it makes everything faster - character speed, super charging, ammo respawns, even animations and attacks have had a speed boost. The aim is to make the game more immediate, more rewarding to play second to second and just to make everyone feel more powerful and heroic. We’ll find out over the next few weeks if it’s worked. The original Destiny got there in the end so hopefully this is the start of several steps in the right direction.  Leon Hurley

4. We're counting on Olaf with A Series of Unfortunate Events

You have to love the perpetually pursued Baudelaire children, but the real star of this twisted tale is Count Olaf, played by Neil Patrick Harris. In season one he stole my heart with his over the top Olaf, a performance so delicious and devislish he made Jim Carrey's version look like the picture of restraint. This season adapts books five through nine in the series, which means we can look forward to following the Baudelaires through a freak show, a sinister village, and a bleak boarding school. Even more excitingly, we can look forward to more of Count Olaf's magical transformations, a testament to the Unfortunate Events make up team. You thought Kim Kardashian's contouring videos were something special? She has nothing on that crew of wizards. Rachel Weber

What: A Series of Unfortunate Events season 2
Where: Netflix
When: March 30

5. Isle of Dogs is another glorious Wes Anderson creation and OMG DOGGOS

Imagine what would happen to Instagram if all the dogs had to be sent to a vast garbage dump called Trash Island because of an infection called Snout Fever. Well, in Isle of Dogs that's exactly what happens, but don't worry, one little boy (just one mind you, if anyone took my dog there would be a murderous rampage) is set to find his best boy, Spot. It doesn't take long for there to be an alpha pack of feral canine heroes - voiced by the likes of Edward Norton, Bryan Cranston, Bill Murray and Jeff Goldblum - and the young ward, Atari, all ready to fight back against despotism.

Queue a whole truckload of cute doggos, cartoonish battles and more all taking place in a wonderland of trash. There might have been complaints racial profiling, but if you focus on the wise and heroic dogs then all is cured. Sam Loveridge

What: Isle of Dogs
When: March 30
Where: A cinema near you

6. Legion is back for season 2. Is it easier to follow than the first season? Of course not…

Legion is the superhero TV show you maybe didn’t catch in 2017. Those who persisted with it, and shared in the show’s slow-burn madness, would probably tell you it’s actually one of the best pieces of TV from last year. But damn - it’s a tough watch. It’s loosely based on the X-Men universe, and features mutants with some more unusual abilities than just ‘being tough’ or ‘having Adamantium claws’. Season 2 begins on Tuesday, April 3, and it’s even more conceptual than the last run… and yet totally brilliant with it. Chances are that you’ll at least need to catch-up with or watch S1 to make (limited) sense of this new episodes, but by the sounds of it that will pay dividends. I mean… there’s a dance-off in this episode between the three main characters, which is probably worth the price of admission alone. Legion isn’t for everyone - it’s conceptual, arthouse TV that puts a smart, tough-to-parse spin on the superhero genre. Try it. It’ll either become your new viewing obsession or… that weird thing you saw and you’re never going to watch again, with her from Parks and Rec in it.

What: Legion season 2
When: April 3
Where: FX channel

7. Beetlejuice is three decades old. So is it time for that long-rumoured sequel, or should we let it die?

Beetlejuice is 30 years old. Not that it probably feels like that, mind. If you’re of the age to remember it coming out, you probably feel like the ‘80s have just ended, DVDs are still a hot new technology, and get thoroughly weirded out by Winona Ryder now being deemed old enough to play a mum in Stranger Things. But even if not, Beetlejuice - Tim Burton’s second-ever feature film, and his initial meeting with future Batman Michael Keaton - is a timelessly fresh horror comedy, as sharp and distinct in its ideas as it is grotesquely funny in its execution. It’s a high-point for all involved, and also significant for giving us the first (and still best) version of that ‘OOM-PA OOM-PA’ style of Danny Elfman theme tune. You know, the one he does when he’s not going full gothic choir. But rewatching Beetlejuice now also raises the question of that long-mooted sequel. Recently re-raised as a going concern by Burton et al, the project is still in that tricky ‘If we can do it justice’ area. But can they, or is Beetlejuice perfect (and enough) as it is? Give it another watch, and see what you think. David Houghton

What: Beetlejuice
Where: Amazon Instant Video, iTunes, Google Play, all manner of
shiny discs
When: March 30

8. Celebrate with the big-eared bunny with the Best Easter Eggs in games, TV and movies

One of the best things about playing games, watching TV shows or movies is spotting an Easter Egg. There's something rather amazing about having that insider knowledge that lets you recognise that subtle reference or tip of the hat. It makes you feel like one of the team, part of the club, the crew when it comes to your favourite franchises.

So what better time to celebrate them than Easter itself! Send us your favourite Easter Eggs with the hashtag #GREasterEggs and lets all celebrate gaming, TV and movie knowledge nuggets together.

Have a hoppy hoppy Easter everyone!