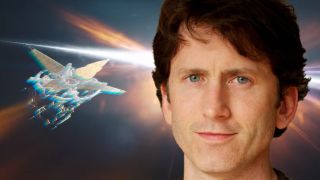 Starfield's existence as Bethesda Softworks' next big project after Fallout 76 was first confirmed at E3 2018... but that's pretty much all we know so far. Sure, the studio has stated that the sci-fi RPG will be releasing on next-gen platforms (both the PS5 and Xbox Series X are launching in Holiday 2020), and it'll be out before Elder Scrolls 6 but, otherwise, Todd Howard and co are staying radio silent for now.

Even so, we've collected everything we know about Starfield so far into this helpful guide to the upcoming RPG, including the latest info on its release date, genre, platforms, and trailers. Sure, the information out there is as sparse as a hectare of the milky way, but look closely, and there's plenty to already get excited about...

The Starfield release date isn’t until 2020 at the earliest

Bethesda has confirmed that Starfield is the next AAA game the studio will be releasing, and the project is already in full production. But the company’s time and resources are also split between developing The Elder Scrolls 6 (which will arrive after Starfield) and The Elder Scrolls: Blades, and supporting Fallout 76 beyond its post-launch funk.

Additionally, Todd Howard has hinted that Starfield won’t be releasing on current-gen platforms, so we’ll at least have to wait until the release of the PS5 and Xbox Project Scarlett (which most bookies have down as 2020) before the game finally lands. Fans should “be very, very patient” hints Howard, in an interview with Gamespot. In better news, Bethesda may confirm a vague launch window at this year’s E3 2019, where the studio’s conference looks to be focused primarily on revealing more about the game in question.

The first Starfield trailer gives plenty of clues about its setting

You can watch the Starfield teaser trailer above, which shows the sun rising on an arid planet as the camera pans down to a space station hovering above, bearing solar panels that curiously take the shape of a star itself. But before we can even take a breath, a brilliant flash of light quickly eats up both planet and space station within seconds, suggesting this part of the solar system is prone to breakdowns in the space-time continuum.

But wait! There’s more! Pause the trailer at the 0:16 mark, and you can spot part of a word in the bottom left hand corner, which reveals a logo followed by the letters “conste…”. This suggests we’re actually viewing the trailer from a constellation camera, though what that could mean for Starfield’s story is anyone’s guess.

Starfield is a single-player science fiction game, and parts of it are already playable

While the Starfield release date may be a ways off yet, Howard has confirmed that parts of the game are already in an operational state. “There are sections of it that are very playable,” he told GameSpot at E3 2018. “We know the game we’re making now, and one of the reasons we announced it is that it’s looking really awesome. We have runway in front of us and we know what’s happening.”

And though it may seem obvious to anyone who’s seen the trailer, Bethesda has confirmed that Starfield is a sci-fi game, but has refrained from specifying whether it’ll follow in the RPG footsteps of Fallout 4 and The Elder Scrolls 5: Skyrim, or play as a different genre completely. Speaking to Geoff Keighley at E3 2018, Howard clarified that Bethesda’s approach to Starfield has been to ask itself; “What is the tone of science fiction that we think is unique and that really excites us? What would we want to do with that kind of game?”

Starfield’s engine is a next-generation game, but could still release on PS4 and Xbox One

Bethesda hasn’t been shy at confirming that Starfield is very much a next-generation game in every sense of the word, and will run on a massively overhauled and upgraded version of the company’s famous Creation Engine. However, Howard hasn’t ruled out the game releasing on the current generation of console hardware, telling GameSpot that  “it’s not out of the question… but there is a question there. I’m being honest, I don’t the answer to that yet.”

Releasing on the PS4 and Xbox One, is “not a priority right now”, Howard continued, explaining that “when you’re making a game you want to get the best stuff on the screen, and then you optimise. If we can cast a wider net then great, and if it can't then we’ve done that before.” It sounds like Starfield is very much being developed primarily for the PS5 and Xbox Project Scarlett, then, but a potential port to older hardware isn’t off the table just yet.

Bethesda has been working on Starfield for over a decade

Howard has called Starfield "the biggest most epic science fiction thing you could possibly imagine” during an interview with NoClip, but a project of that magnitude requires years of development before a studio is comfortable even acknowledging it in public. According to Howard, Bethesda has been working on the IP in some form or another for over ten years, though the company only filed the trademark in 2013, which was around the time it entered full pre-production on the game in earnest.

Still, four studios under the Bethesda Softworks family (Washington, Montreal, Dallas, and Austin) are currently helping out on Starfield in some form or another, which perhaps explains why Howard thinks the company is now “uniquely positioned to pull this game off.” So yeah, Bethesda is really going to town on this thing, in case you had any doubts.

Starfield is one of several new games of 2019 and beyond on the way. Click on the link to discover more, or watch the video below for some bitesize highlights!