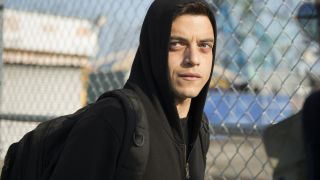 The Mr. Robot season one finale was quite the thrilling affair. Big hacks! Mind-boggling twists! And uh... amnesia! It wasn't exactly memorable for Elliot, who blacked out for the three-day hacking extravaganza carried out by fsociety, and if this first trailer for season two is any indication that's still very much the case. Check it out below:

As well as touching on the matter of Elliot's memory loss, it looks as if the group's motivations to educate the world on what's *really* going on is still the series' driving force. That shouldn't be too much of a problem, especially now that Obama's in on the action.

Of course, the best parts of that first batch of episodes were the things that you had no idea were coming. Ahem, yes that Mr. Robot and Elliot twist was a mysterious and unexpected turn of events. The glimpses of the pair in this teaser indicate that relationship will be explored in greater detail, so here's hoping that season two has even more bizarreness of that calibre. Sorry, season_2.0.

Mr. Robot season 2 premieres July 13 in the US on USA, with each episode scheduled to arrive the next day in the UK on Amazon Prime.