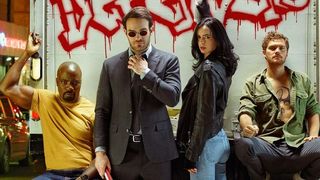 Iron Fist may be just around the corner but Netflix’s The Defenders is where everything’s leading to this summer – and one sneaky onlooker has managed to film what looks like a key scene starring three-quarters of Marvel’s other superhero squad.

Taken from ComicCon.news, the video has had its audio scrubbed to avoid spoilers (and probably a big ol’ legal notice) so, rest assured, your headphones aren’t broken!

The scene shows Luke Cage (Mike Colter) and Jessica Jones (Krysten Ritter) flanking Iron Fist, who is carrying a wounded Misty Knight (Simone Missick) in his arms. There’s also Claire Temple (Rosario Dawson) (she has the worst luck) and what looks like Iron Fist’s Colleen Wing (Jessica Henwick) who looks a teensy-bit bloody and has ruined a perfectly good hoodie. For shame.