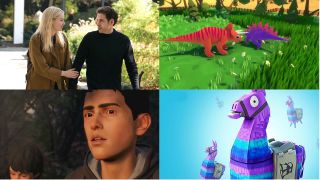 1. The Golden Joystick Awards 2018 voting goes live - but can Gorgora, Dead Cells and Subnautica steal the spotlight from big hitters such as God of War?

The world’s longest-running public-voted videogame awards show announces its shortlist, with millions of voters poised to pick their games of the year. Big console titles such as Spider-Man, God of War and Monster Hunter: World will duke it out with breakout hits - and acclaimed indie games - such as Forgotten Anne, We Happy Few and Owlboy; across 16 voted categories including Best Storytelling, Best Visual Design and Studio of the Year. This year’s big change is that the coveted Ultimate Game of The Year trophy gets it own one-week voting window which starts on October 26. This allows the inclusion of games such as Assassin’s Creed Odyssey, Call of Duty Black Ops 4 and Red Dead Redemption 2 which launch during the regular voting window, allowing you more time with these huge titles before casting your vote for 2018’s best game. Over 100 games have made this year’s shortlist across all categories, with God of War and - likely to the surprise of many - wordless hand-drawn puzzle game Gorgora leading the pack with four nominations each. Subnautica and Monster Hunter: World get three nods each, in what is the most diverse, and likely to be most keenly-contested, Golden Joystick Awards in years. Support your favorite games - and send a clear message to publishers to take more risks - by voting for the titles that captured your attention and, possibly, your heart. Daniel Dawkins

What: The Golden Joystick Awards 2018
Where: goldenjoysticks.com
When: September 21st

2. Will Fortnite sixth season put it back on track?

Let’s be honest, Fortnite isn’t going anywhere anytime soon but it’s fair to say that its fifth season didn’t have the rocket bangs and Infinity stone whistles of the fourth. In fact, not a lot really happened. We’ve had the giant cube slowly rolling around the map that, as of now, has sunk into Loot Lake, and you can bet some v-bucks that's not the end of  it. But compared to the environmental storytelling and stories hidden within the blockbuster loading screens we’ve seen before it’s felt a bit empty... Seriously though please bet me some v-bucks. I spent all my bread and sweets money on that stupid dragon glider.

Season 6 though, if rumors are to believed, is looking like it’s going to be a bit special. The last unlockable loading screen featured Bright Bomber touching the cube and a reflection of an ‘evil’ version looking back at her. This had led to speculation that season six will bring about big changes to the map to fit the new ‘dark’ theme. New points of interest would include a theme park complete with roller-coaster and a volcano! It’s about time we saw some big changes to the map and if you ask me this new dark theme also opens up the possibility to replace grenades with fireballs and shields with protection spells. If we’re going dark, let’s go full witches and magic please Epic.  James Jarvis

What: Fortnite
Where: PS4, Xbox One, Nintendo Switch, PC
When: September 25

3. Can This Is Us score a perfect hat trick with its third season of dysfunctional fam-drams?

To those who haven’t been watching This Is Us since its 2016 debut, stop what you’re doing and change that right now. While its familial sentiments might be too sweet a sugar cube for everyone’s cup of tea, the show’s time-hopping, aphoristic script elevates it a sizable few cuts above every other US drama of its kind. While most new shows take time before really hitting a certain stride, This Is Us has hooked, ensconced, and firmly punched you in the prefrontal cortex by episode one. Then there’s the allure of its main cast; Sterling K. Brown, Ron Cephas Jones, and Milo Ventimiglia, to name just a few, all giving Dan Fogelman’s sharp prose justice through earnest, arresting performances that fizz with chemistry. To start postulating over season 3 would be to delve into spoiler territory (and trust me, you don’t want this show spoiled for you), but suffice to say that This Is Us represents the kind of hopeful, additive TV medicine than our cynical world needs right now. Alex Avard

Dinosaur theme park sims are, apparently, a lot more like buses than we thought. You wait eons for one to pop along, and then three release at once. While most of us have already played Frontier Development’s excellent Jurassic World Evolution, and the lesser known Mesozoica isn’t even worth a look-in, there’s one more jurassic themed title to scratch that “No expense spared” itch this year. Parkasaurus is basically the cuter, zanier little brother to Evolution, an indie management sim from Washbear that’s due to release in Early Access next week. The dinos of Parkasaurus are just as likely to wear funny hats as they are to make lunch of any nearby humans, but the game also promises to offer a level of strategic depth that its visual charm belies, with a grid-based creation system that gives players carte blanche over the layout of their reptilian resort. Get ready to indulge in unethical science all over again, and this time, bring your best dino puns. Alex Avard

What: Parkasaurus
Where: PC
When: September 25

5. South Park Season 22 premieres on September 26 - but is the show going to be cancelled?

When a series has been running for as long as South Park - the first episode aired TWENTY ONE years ago - it can be hard for the writers to keep the show fresh. Famously, creators Matt Stone and Trey Parker work on the latest episode right up to deadline in the week before it airs to make it as topical as possible - but by their own admission, current events (especially in America) have become satirical themselves, making it increasingly difficult to joke about them and calling into question the show's future relevance. With that in mind, the #cancelsouthpark campaign was launched - so could this be the end? Thankfully for fans of the irreverent series, this appears to just be a marketing campaign, and if you look at the South Park Twitter feed you'll see cheery responses with the season premiere details going out to those tweeting both for and against the cancellation. We can't predict what will be in the new season - the creators probably don't know themselves yet - but with recent salacious claims in the news it's a pretty safe bet that South Park's own President Garrison will be in the firing line. Iain Wilson

What: South Park Season 22
Where: Comedy Central
When: September  26

6. Life Is Strange 2 starts September 27… so now is the time to go Awesome

Fans of episodic narrative adventures with relatable characters and knotty moral choices… rejoice! The full Life is Strange sequel starts at the end of the month with, we assume, episode 1. However, if you can’t wait that long (who can?) don’t forget that you can still download The Awesome Adventures of Captain Spirit, for free, and play a good 2-3 hour prequel to LIS2 right now. What’s more, the decisions you make as young Chris Eriksen in Captain Spirit will actually impact the way Life is Strange 2 plays out, even though the lead characters are different. In LIS you’ll assume the role of Sean Diaz, a young fugitive, although we do know he’ll cross paths with Chris at some point (the reveal trailer shows the characters are in the same part of the US). So, yes, brace yourself for more Life is Strange, but also make sure you’ve played the freebie prequel too. Because it’s free.

7. Get ready for Netflix to make your head spin with psychological mindf**k Maniac

Yes, that’s right, there’s another Netflix Original out today - but why should you care? There’s been so many already, what makes Maniac any different? Well, for starters it has an A-list director and cast usually reserved for big Hollywood blockbusters... it’s a limited series so all you’re getting are these ten episodes and no promise of a second season… oh and it’s a psychological mindfuck of such epic proportions that you’ll need to rest of the year to figure it out. Directed by Cary Fukunaga (the man who’s just been put in charge of Bond 25) and starring Jonah Hill and Emma Stone, Maniac tells the story of two people who enter an experimental drug trial for different reasons and form an inexplicable bond. Having seen the first two episodes myself already, I can tell you that it’s a beautiful sci-fi mix of Blade Runner and Eternal Sunshine of the Spotless Mind, and I have NO IDEA WHAT’S GOING ON. Go and watch it so we can talk about it. Lauren O’Callaghan

What: Maniac
Where: Netflix
When: Today

For gamers in the UK and US, the hype calendar is built firmly around the gaming trade show E3, which takes over LA in June, but you shouldn't discount the Tokyo Game Show, which is happening right now. Japan is, after all, the heartland of video games and home to Sony, Nintendo and Capcom, to name just a few. We're expecting to see new footage from Death Stranding, Kingdom Hearts 3, Sekiro: Shadows Die Twice as well as a bunch of new announcements. Get Google Translate ready, stuff a value bag of popcorn in the microwave and settle in for a weekend of new trailers and teases.

8 things to watch out for this week picks the best games, movies, and shows of the next seven days every Friday at 9am PDT / 5pm BST.