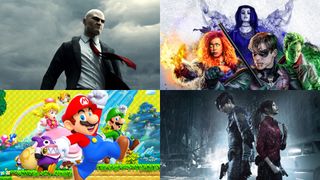 1. New Super Mario Bros. U is bringing classic 2D Mario action to your Switch, so grab some pals and get in on the mayhem

Sometimes I feel like I'm still in mourning for Super Mario Odyssey. I never wanted that game to end, but as Mario and co drift into the sunset on their gold balloon, it's time to look to the future, and thankfully that future still has Mario in it. The latest Super Mario game to hit Switch is New Super Mario Bros. U Deluxe, a remake of the Wii U classic released back in 2012, and it's all about that 2D side-scrolling magic, multiplayer madness and wonderful inventiveness without losing that Mario goodness. If you love old school Mario, or have a family that loves to play games together, this is what the Switch is all about. Innovation manages to creep into each level and challenge the way you think about the classic layout of a 2D Mario game and it looks utterly stunning on Switch too. Get your mitts on this one, it's a treat. Sam Loveridge

What: New Super Mario Bros. U Deluxe
When: Out now
Where: Nintendo Switch

Now I like Hitman: Absolution, one of the more divisive games in the series. It's a more linear, story focused game along the lines of a 'Hitman: Arkham' style take on the franchise. It wasn't everyone's cup of cyanide laced tea though so Blood Money is the real draw in this twin package 4K remaster. Both are lovingly remastered in 60fps and 4K, letting you do horrible things to people in greater detail than ever before. Blood Money sees 47 travel to America and includes some of the greatest levels the game's ever seen, including the ability to murder an opera singer mid-show as part of the performance. Absolution on the other hand sees 47 trying to save a girl he's mysteriously linked to and has greater narrative focus adding linear sections to counter the larger open sections. As well as the resolution and frame rate improvements both games benefit from better textures, super-sampling, improved shadows and modernised, updated controls. If you liked the more recent games then this is an excellent way to go back and try a slice of Agent 47's history. Leon Hurley

What: Hitman HD Enhanced Collection
When: Out now
Where: PS4, Xbox One

3. DC's Titans is out on Netflix on January 11, and with 86K dislikes on YouTube, can it prove the internet wrong?

86,000 dislikes on Youtube. Last year that’s roughly how the internet felt about DC’s Titans, a live-action series about the classic comic book gang of Raven, Starfire, Cyborg, Beast Boy, and Robin. Way back in 2003 the Teen Titans cartoon set a high bar for future versions of the group, as it depicted the conflicted superheroes and dropped some real life lessons along the way, such as Starfire’s encounter with extra-terrestrial racism and Raven’s abusive father. Just looking at the comments underneath the first trailer for DC’s Titans shows how high expectations were: people criticise things from Raven’s (now named Rachel) wimpy disposition to the lack of Cyborg in both trailers. Can the series prove the internet wrong? Gizmodo praised the show, which has already aired in the US, for how it deals with Robin’s PTSD, but Collider branded it a “slog” and the Hollywood Reporter criticised it for trying too hard to be edgy. All that’s left is for you to watch it for yourself and see how it holds up. Zoe Delahunty-Light

What: DC’s Titans
When: January 11
Where: Netflix

4. Vane is the unexpected indie title from ex-Team Ico developers that looks like somebody made a Monument Valley version of The Last Guardian

I didn't even know that Vane existed, but it turns out that's because the studio behind this little known indie game has been quiet for a number of years since first announcing the game at Tokyo Game Show in 2014. But boy does it look incredible. It's brought to you by brand new studio called Friend and Foe, which was founded by ex-Team Ico developers, and absolutely oozes Shadow of the Colossus and The Last Guardian aesthetics. You play as a young, shadowy, boy who has the ability to transform into a hawk - as you do - and you're exploring a forgotten and ruined land, which is basically Team Ico's whole aesthetic. But watching as many trailers for the game I can find, you quickly realise that there are elements of Journey in this too, as the remnants of this world you've found evolve, build and react to you being there and traversing through it. This is going to be one of those indie games that everyone's talking about, let's just make sure we're one of them eh? Sam Loveridge

5. Ease yourself into the new year with fun sex comedy Sex Education

I know, I know, you don’t need another new Netflix Original to add to your ever-growing (and somehow, never getting any shorter) watch list, but hear me out. We’re barely into 2019 and if you’re anything like me, you’re struggling to return to normal life after a Christmas filled with too much food, booze, and lie-ins. What you need is a fun, easy to watch comedy that you can binge while your brain gets used to functioning correctly again. Enter; Sex Education. A coming-of-age sex comedy about Otis (played by Asa Butterfield, who you might recognise from Miss Peregrine's Home for Peculiar Children) who’s struggling through that awkward point in his life where he’s trying to work out love and sex, and isn’t finding it any easier thanks to his sex therapist mother, played by the wonderful Gillian Anderson. The early reviews are promising with The Telegraph calling it “an addictive teen comedy drama with empathy, wisdom - and a hip soundtrack” and GQ hailing it as “the best portrayal of sex, and teenagers, out there”, so make sure you check it out this week. Lauren O’Callaghan

6. Will the original Onimusha stand the test of time?

It's been a long, long while since Capcom kicked off its samurai action series with Onimusha: Warlords back in 2001, and I'm not so sure that a 2019 HD remaster is destined for greatness. On paper, this all-platforms port of Onimusha sounds just fine: graphical overhauls for cutscenes, characters, and environments, widescreen or classic display modes, a new control method supporting more intuitive analog controls, a redone soundtrack, and new Japanese voice acting. But looking at the trailer above, this seems like something you'd buy as a part of a remastered trilogy, rather than a $20 one-off. Thinking back to when I played Onimusha: Warlords on the PS2 long after it launched, I was rather endeared by Samanosuke's clunky tank controls (akin to early Resident Evil games) and the jaggy but ambitious visuals. But by modern standards, I can't imagine that anyone who didn't play it way back when could possibly be dazzled by this. At least it's got a budget price for anyone interested in giving this of-its-time classic a go. Lucas Sullivan

What: Onimusha: Warlords
When: January 15
Where: Nintendo Switch, PS4, Xbox One, PC

If you’ve been itching to get a taste of the shiny new Resident Evil 2 remake then now’s your chance. For half an hour. There’s finally a demo out now that you can play but it only lasts for 30 minutes. After that you can’t access it anymore. The good news is that the section you get to play - where Leon first arrives at the Raccoon City Police Department - only actually lasts about 22 minutes played at a normal pace. So if you want to see the whole thing you don’t have to rush. And that’s probably the best way to see it all: soaking up the undead ambience and placing headshots on zombies from a distance. If you do want to explore and see as much as you can then make sure you ignore the call to return to the hall when you get it. You’ll know what we mean when you get there, but it ends the demo if you do. You can restart but with hardly any time and right back at the beginning. It’s better to use up all your time one go, when you’ve more of the police station unlocked. And, pro tip: give every zombies a prod with your knife just to make sure they’re dead.

8. Can Shadow Heritage lure us back to Ancient Greece?

Assassin's Creed Odyssey was released way back in October 2018, before we'd put on all that Christmas ham weight, but the most recent DLC release looks like the perfect reason to squeeze back into our Spartan armor. Out on January 15, the second episode of The Legacy of the First Blade is called Shadow Heritage, and will have you heading to Achaia to deal with a blockage, face off with the Order of the Ancients and a naval commander called the Tempest. Always the overachievers, Ubisoft has added a load of free updates to the game this week too, including new mercenary tiers, a mythological new vendor: Hephaistos and a new cyclops to kill. It's definitely enough to send me back to the sun and sands of Odyssey, and it might even help with my winter blues. Rachel Weber