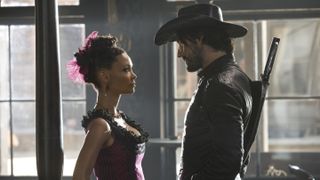 Will Westworld really be the next Game of Thrones? Therein lies the question. The trailers and posters we've seen so far seem to suggest so. While its marketing team is definitely pushing the 'sci-fi western that grapples with man's incessant need to tinker with technology' angle, this is still HBO. It's got sex, violence, and weird stabby sex murder. And that's just the bits we've seen.

This newest chunk of footage, a talking heads featurette, delves a little deeper into the man vs. robots (sorry, hosts) battle. There's a lot of unseen stuff in here so beware. If you're wanting to go into Westworld with fresh eyes, perhaps click elsewhere.

At its heart, Westworld appears to be about mankind's never-ending hedonistic pursuits (sex with robots!) The cool thing about that set-up is that it doesn't end there: the creations begin to literally fight back. I'm a fan of the artificial intelligence revolution trope, particularly on this small a scale. This ain't the big, bad Skynet detonating nukes: it's personal, hand-to-hand combat. Things are going to get pretty bloody - and pretty milky - by the end of this brawl.

Co-starring Anthony Hopkins, Evan Rachel Wood, Thandie Newton, James Marsden, Jeffrey Wright and Ed Harris, Westworld will premiere on October 2, 2016 on HBO in the US, and on October 4 on Sky Atlantic in the UK.