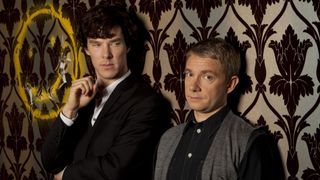 The crew behind BBC's Sherlock takes a lot of pleasure teasing us with clues concerning the show's upcoming season. San Diego Comic Con this year saw the creative team reveal three names connected to season 4 - Smith, Thatcher and Sherrinford. That naturally spurred on some very apt detective work to figure out what they might mean. By the looks of things, those guesses might not be too far off. Here's the episode titles as released to the official Sherlock Facebook:

OK, so it's not all of the titles, but there's enough here to tell us something new about the season. "The Six Thatchers" is a nod to the Arthur Conan Doyle story "The Six Napoleons" that features a criminal who destroys busts of Napoleon in pursuit of a hidden black pearl. "The Lying Detective" links in the name Smith, as in Culverton Smith, a murderous crook who Sherlock catches while pretending to be poisoned.

This leaves that ominous question mark for episode 3. Sherrinford is still untapped in this short list of episodes. That's the name Doyle gave to Sherlock's sibling, so might it mean we're going to encounter the good detective's older brother in the season closer?

Sherlock season 4 will premiere in 2017.