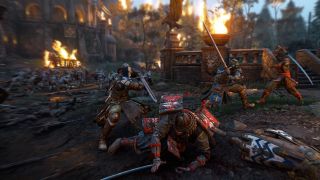 An early For Honor review? EVERYTHING IS SOULS! Yes, it was inevitable. In the wake of Grand Theft Auto 3's success in 2001, developers became obsessed with open world design. By 2007, Assassin's Creed had presaged Ubisoft's fate. In 2011, Dark Souls captured the hearts of studios everywhere. Now, in 2016, Ubisoft brings us For Honor. What's it like? We played the closed For Honor alpha and discovered a very unusual game.