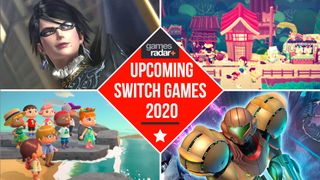 What a year it's already shaping up to be for Nintendo. With so many exciting upcoming Switch games heading to the console's library, you have all manner of reasons to look forward to the months ahead. It's the year we're actually reuniting with Tom Nook and Isabelle with Animal Crossing: New Horizons after all, and we also get another helping of Pokemon goodness with the adorable Pokemon Mystery Dungeon: Rescue Team DX.

But the Switch goodness doesn't stop there. We're also going to be blessed with a whole host of exciting indie numbers including Spiritfarer and Mineko's Night Market.

This list of ever-growing upcoming Switch games are the ones we'd really recommend, either because we've played them or they already exist on other platforms and are getting a Switch port. Helpfully, this list is also in release date order to help you stay on top of all the latest upcoming releases.

Remakes of the original 2006 releases of Pokemon Mystery Dungeon: Red Rescue Team and Blue Rescue Team for the Gameboy Advance and the Mystery Dungeon titles for the Nintendo DS are coming to the Switch. In this spin-off, you actually play as a Pokemon who can befriend and fight alongside other Pokemon. From a selection of some much-loved Pokemon, you answer questions to discern which Pokemon you'll play. Remade in an adorable storybook style, it looks like we're in for a treat.

Looking for games to play right now? Don't miss our list of the best Nintendo Switch games that are in stores or available online today.

Get ready to take flight, because the Nook Inc. getaway package is going to take us to a deserted island next year, for what is sure to be the vacation of a lifetime. Yes, this time the Animal Crossing world is on a dreamy tropical island with more activities than ever before. With some inspiration no doubt taken from Pocket Camp, New Horizons will let us decorate the entire world, from our adorable campsite and tent, to the surrounding areas. We'll also be able to craft all manner of items and clothes using the new workbench, complete with fishing, cooking, digging, chopping down trees, gardening, and experiencing the changing seasons. Oh, and it'll let you play with up to eight friends on the same island. We can hardly wait!

The creators of Assassins Creed Odyssey are bringing us a new kind of story book adventure that's based on the stories of Greek Mythology. Complete with a charming painterly art style, Gods & Monsters sees you play as a hero who sets out to save the gods using the powers granted to them by the gods of Olympus. The gods have fallen victim to the most powerful mythological monster known as Typhon, and it's up to you to venture out into the world and stop this deadly creature. The cinematic trailer might not have shown off any gameplay, but we're already convinced this enchanting artistic world is definitely one we want to dive into.

If you are incapable of watching the above Mineko's Night Market trailer and suppressing squeaks at all the adorable kitties it contains, this isn't a game for you. It's basically a kind of game like Animal Crossing or Stardew Valley, where you explore, craft, oh and breed cats. The cute little balls of fluff will follow you around as you play as Mineko who's just moved to Mount Fugu Island, and is also accompanied by her giant cat-like friend Abe. Together, you'll gather resources and craft items to sell at your market stall, play loads of mini-games, and of course, befriend kittens. Lots and lots and lots of kitties. Sounds rather wonderful, doesn't it?

Taking inspiration from Scandinavian folklore, this adventure game is described as a dark contemporary fairytail. Featuring puzzles, exploration and a touching narrative, it’s also very notable for its mention of having non-violent game-play and accessible controls. The enchanting art style and fairy tale vibes from Polygon Treehouse make it stand out as one of the more interesting upcoming releases heading to the Switch. It’s due to release this winter, which certainly seems very apt for Röki since it promises to take us on a journey through the magical wintry wilderness.

Described as a homage to classic JRPGs, Modus Games stylish 2D RPG is said to land on the Switch sometime in 2020. The gorgeous art work of Cris Tales is already enough to grab our attention, but it also looks set to tell a very interesting time-bending story. Set in an dark, expansive fairy-tale world, you work to uncover and unravel the Empress' complex plot to destroy the world by making choices in the past, present, and future. With a turn-based battle system, the studio sights the likes of Chrono Trigger and Final Fantasy VI as sources of inspiration for what it's calling an 'indie love letter' to the genre. Sounds pretty intriguing, right?

When you think about the post-apocalyptic world, the word charming doesn’t normally come to mind, but when it comes to Eastward it most definitely applies. Set in a near-future society that’s on the brink of collapse, the human population is at an all-time low. You play a minor called John who meets a mysterious young girl named Sam in a secret underground facility. Setting out on a journey with the pair of them as they work to discover the true origins of Sam, you uncover where the vicious creatures who wreak havoc across the towns come from. Eastward’s gorgeous pixelated art brings the apocalyptic setting to life in its own distinctive style - a decaying world never looked so picturesque. The story has already piqued our interest, and it also looks perfectly suited to the Switch.

Head to page two for more upcoming Switch games for 2020 and beyond...