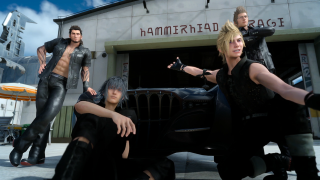 A few eyebrows raised recently when game director Hajime Tabata was reported as saying that the last half of Final Fantasy 15 would be linear - a contrast to the open world stuff that's been shown off so far. Now it looks like that might not strictly be true.

Much of the idea of what he said before still applies: that the game needs to be more constrained in the later stages - but speaking to IGN he described the move from open to linear as "very close to the end of the game".

He mentions the change occurs "when the main character and the enemy are going against one another," and that it creates a build up in the story. That makes it sound a lot like we're moving into finale territory when things close off.

The change over will apparently happen after a specific point: "After [a] train sequence, it kind of episodically goes through the story and takes it up to the end," explains Tabata. He also says that after that point the only way you'll be able to go back to the open world is via then menu. Otherwise, "you won’t be able to physically go back and forth between those two areas," he clarifies.