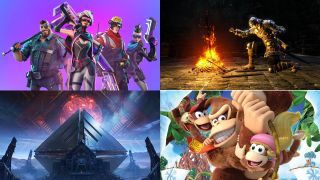 1. Fortnite Season 4 is here; is this a good time for new players to jump in while the hype is at its hottest?

I know I'm months behind my GR+ peers, not to mention the rest of the known universe - but I'm finally jumping into Fortnite Battle Royale, just in time for the kickoff of the superhero-themed Fortnite Season 4 content. H1Z1 was my last foray into 100-player battle royales, as I purposely skipped the drab-looking PUBG, so it'll be interesting to see how I fare in the coming weeks amidst a player base full of hardened veterans. From the little I've played thus far, it still seems fairly welcoming for any newcomer who knows how to aim a cartoon gun and dance around whenever they're under fire. But the main challenge I'm facing so far is deciding when I'm done playing. In most competitive games, like Hearthstone and Heroes of the Storm as of late, I always prefer to end on a win - but in Fortnite, that's statistically quite rare (unless you're a gifted fort-constructing, shotgun-spraying savant). I'm also of two minds when it comes to the Battle Pass: it's great value for the money, but the unlock system feels so arcane to a novice like myself, with all the many challenges and objectives swirling about the lobby menu. Let's see how long Fortnite can hold my admittedly fleeting attention before I inevitably switch gears to play some obscure game made in the 1990s. Lucas Sullivan

What: Fortnite Battle Royale
When: Now
Where: PS4, Xbox One, PC, mobile

Read more: Destiny 2: Forsaken review: “Cayde-6 may be dead, but Destiny 2’s heart beats on stronger than ever”

2. Cannes Film Festival is back… and this time, Netflix isn’t invited – but why?

One of the most prestigious film festivals in the world kicks off this week, but as all movie eyes turns towards Cannes, they’re not just looking for new movies… they’re also wondering where Netflix is. You might remember that the streaming service caused quite a hullabaloo at last year’s festival, in more ways than one. While debuting critically acclaimed Netflix Original Okja (which competed for the coveted Palme d'Or in the main competition section), its logo was also met with boos from some audiences. This year, Cannes has opted to ban any movies without a theatrical release from winning awards. While this doesn’t stop Netflix attending, the company’s chief content officer, Ted Sarandos, said they would not be bringing any films to Cannes this year, stating: “We want our films to be on fair ground with every other filmmaker”. While there’ll no doubt still be plenty to talk about from the festival - stay tuned to GR+ over the next couple of weeks for the best films coming out of Cannes 2018 - Netflix absence will almost certainly be the elephant in the room. Lauren O’Callaghan

What: Cannes Film Festival
When: May 8 - 19
Where: Cannes, France (but also on GamesRadar)

3. Does one of the best Wii U exclusives hold its own on Nintendo Switch?

The Wii U worked hard, bless its heart, but thanks to its clunky form, difficult developer platform and downright weirdness, not many people bought it. Because of that, a lot of absolute gaming gems were lost to the dusty shelves of the Wii U game library, including one of the best 2D platformers ever and one of the best Wii U games - Donkey Kong Country: Tropical Freeze. Running at 720p HD in handheld mode and at full 1080p HD on the big screen, this Switch port makes sure that Donkey Kong has never looked so good. Collectibles, hidden areas and bananas galore adorn the stunning side-scrolling levels on offer, complimented by a soundtrack that is best cranked all the way up. If you missed out on Tropical Freeze the first time around, the fact it’s now on Switch means you now have no excuse. Go buy it. Go on, what are you waiting for? Sam Loveridge

4. You might not be able to take your Lightsaber to work, but you can celebrate May the Fourth with the best Star Wars t-shirts in the galaxy

Happy Star Wars Day everyone. May 4 brings with it many a May the Fourth pun and lots of giddy excitement about the latest and upcoming Star Wars films, but if you’re looking for another way to celebrate Star Wars Day, you’re in luck, because we’ve found the very best Star Wars t-shirts to show your love of a galaxy far, far away. Whether you’re planning a Star Wars Day party tonight or you’re just going to kick back with a few friends and re-watch The Last Jedi, do it wearing one of these Force-focused tees. From colorful recreations of your favourite droids, to more subtle Star Wars-inspired looks, there’s something for everyone and it’s a great way to show your support for the Empire/Rebels/BB-8 without stopping everyone on the street today and saying ‘May the fourth be with you…’ Although you can do that too if you want. Lauren O’Callaghan

What: Star Wars Day
Where: Everywhere
When: May 4

5. There's never been a better time to give For Honor a try as part of its limited time free weekend

For Honor launched back in February 2017, and for a long time it wasn't plain sailing for the medieval fighter. Ubisoft implemented an ambitious online matchmaking system similar to P2P, which in theory would deliver a smooth experience to all players but in reality lead to long wait times, lag, instability, and disconnections. The good news is that as of March 2018, all platforms have now been migrated to dedicated servers to help mitigate these connection issues, and the even better news is you can play it this weekend completely for free. All modes will be available, including 1v1, 2v2, 4v4 and the story, as well as the full roster of 18 Heroes and all 18 maps. Plus you can enrol in the Warrior Training Program, which rewards existing and new players who work together. This is not your typical hack and slash game, as the 'Art of Battle' system allows you to position your weapon and choose your attack style based on visual clues from your opponents, to create a much more tactical combat experience. So if you want to try out a different type of online fighting and see if it's for you, then grab your knight, samurai, or viking and get involved this weekend. Iain Wilson

What: For Honor free weekend
Where: PC, PS4, and Xbox One
When: Until 6 May

6. Can Destiny 2’s new expansion, Warmind, justify the recent resurgence in player faith, and make good on Bungie’s promises to do better?

For the last three and a half years, it’s been a cycle as regular and unswerving as night-and-day. Bungie makes a design change that annoys the Destiny community, and the Destiny community laments it on Reddit. Bungie offers wishy-washy blog-posts full of vague, evasive language offering pledges of generic improvement - because ‘We’re listening’. Things slowly change, then it all happens again. But Destiny was ultimately good. The lightweight Destiny 2, so far, hasn’t been, and goodwill has been worn to breaking point. But recently, things have changed. Bungie has given real, tangible hints that it might finally break the pattern, with an empowering recent sandbox update, the return of 6v6 Crucible, an exciting, carnage-hungry Exotic gear overhaul, and some specially written, entirely more serious, D1-style narrative lore. All in the lead-up to the Warmind expansion on May 8. Could we be turning a real corner? Will this new, ‘dream Bungie’ last? How much can Warmind fix alone, before the game’s really big update in September? For a lot of reasons, Destiny 2 is exciting again. Cross everything, Guardians. David Houghton

7. Did David Cage's maligned Beyond Two Souls gets the credit it deserves? Decide for yourself on PS Plus

I'm one of the few people that actually enjoyed Beyond: Two Souls. That's partly down to the fact I'm a really big fan of Ellen Page, but also because - like other David Cage games - it manages to explore the mundane in a way that makes them video game worthy. You go from being a young, frightened girl hugging a teddy bear, to an awkward teen at a high school party, and even tidying your apartment before a date. Of course, later on you will be hiding in the shadows from Somali warlords, but it's that small stuff and the excellent acting that made Beyond: Two Souls a game worth playing. But you don't actually have to take my word for it, because Beyond: Two Souls is now available for free on PS Plus for the whole of May. Sam Loveridge

What: Beyond: Two Souls
Where: PS Plus for PS4
When: From now until May 31

8. Prepare to download: Dark Souls: Remastered gets a network test (read: beta) this week, but who will fill the servers this time around?

The first public delve into a From Software RPG is always a special time. The depth, difficulty, and oblique arcanery of a Dark Souls or Bloodborne makes for a stirring, thrilling, and often terrifying collective journey into the unknown. It’s also a fantastic catalyst to kickstart the fan community into a giddy fervour of joined-up mystery solving, shared system exploration, on-the-fly tips, commiseration, and general hand-in-hand tomfoolery. But how does that work when we’re looking at a remaster of the very first Dark Souls, a game that community now knows inside out? The tester response is going to be interesting, because it might well indicate exactly who Dark Souls: Remastered is attracting. If it only pulls in hardcore, seen-it-before Souls fans, then perhaps Dark Souls’ (unfounded) reputation for brutal intimidation has become so solidified as to lock the fanbase down. But hopefully, if this next server test kicks up a whole new wave of excited confusion and camaraderie, Dark Souls’ legendary sense of community could be deservedly refreshed. It’s still a game with a hell of a lot to give, and it’s ready to deliver its joys to a whole lot more people to come. Find out how by downloading the server test client before May 8, before the test launches on May 11. David Houghton

What: Dark Souls: Remastered server test
Where: PS4, Xbox One
When: Download before May, test on May 11 - 12