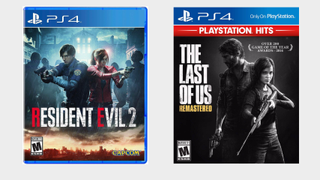 Looking to save some cash on a selection of newer games? Have plenty of time to game but short on budget? Have no fear, as there's a sale on games just for you. Right now, Amazon is holding a Buy one, get one at 50% sale that covers a wide variety of titles across various systems, including games like No Man's Sky, Crash Team Racing, Devil May Cry 5, Sekiro, World War Z, Metro Exodus and more.

Many of the titles' prices have been slashed in addition to being available as part of the deal so it's a great time to swoop in and pick up a couple of games. The deal spans both Xbox One and PlayStation 4 console games, and we should point out that the 50% discount will apply only to the cheapest game you select, so bear that in mind. For instance, you can select the recently-released Samurai Showdown for $50 (usually $60) and Resident Evil 2 Remake for $38 (normally $60) and end up saving nearly $20. There's a good spread of games and prices so it pays to have a look at all the different combos you can put together.

With fall's slate of games around the corner, it's a great time to see what's out there and jump on your backlog while we've got a bit of a lull. Plus, there's a few lovely Moleskine notebooks up for grabs in the same sale if you need some new note-taking apparatus. Or if you just like moleskin notepads.

Buy one , get one at 50% off | Selected console games | Amazon
This offer is live right now, and provides a great opportunity to pick up a few of those games on your wish list at bargain prices. Remember its 50% off the cheapest game you select.View Deal

As well as the larger promo that has a broad reach, some of the games in the offer are actually at pretty good discounts already. Here are some highlights that might prove tempting on their own, or at least as a starting point for the above deal.

Resident Evil 2 on PS4 or Xbox One | $38 at Amazon (save $22)
Take Raccoon City back from the hordes of zombies shuffling about with Resident Evil 2, an absolutely excellent remake that's well worth the money, especially at this discount. View Deal

No Man's Sky on Xbox One | $26 at Amazon (save $24)
Given it's getting a big update literally this week, what better time is there to jump into No Man's Sky? Particularly at this price.View Deal

Devil May Cry 5 on PS4 or Xbox One | $40 at Amazon (save $20)
A decent saving on one of this year's biggest games and a welcome return to the much-loved franchise.View Deal

Kingdom Hearts III on PS4 or Xbox One | $30 at Amazon (save $30)
Experience the magic of the final entry in the Kingdom Hearts trilogy for half-off its regular price, or get it in addition to another game to take advantage of this BOGO deal. View Deal

World War Z for PS4 or Xbox One | $33 at Amazon (save $7)
A modest saving on a game that's not a world beater but a very robust co-op zombie shooter, quietly going about being one of the most underrated games of the year.View Deal

To get the best out of all these games it's always worth considering going for the top consoles of our times with one of the best Xbox One X deals or one of the best PS4 Pro deals going so check them out too.