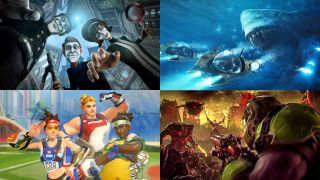 1. One weird dystopian game has summed up my 2018 angst perfectly

A steady diet of horror films, Silent Hill and Stephen Kings has de-sensitized me to almost every scare a game can deliver, but something about the dystopian world of We Happy Few made me want to pop some valiums and retreat to a warm bubble bath. The open world adventure is as British as Yorkshire Pudding and bread sauce, and perfectly captures a heady cocktail of fear, xenophobia and fake news that's all too familiar in the dumpster fire we're calling 2018. The bitter story and surreal visuals won't be for everyone, but if you enjoy humor that's blacker than a goat called Philip you have to give it a try. Rachel Weber

2. The Meg has just the right amount of shark-based stupid to combat all the world's seriousness right now

Stayfem...sorry, Statham fighting a massive, murderous shark. These are the things dream movies are made of. The entire pitch for this new don’t-think-too-hard action flick is ‘what if Jaws but the shark was really big’, replacing the usual menacing fin in the water with a megalodon (hence The Meg). That’s a 59 ft prehistoric shark which, if you’re not up to speed on your cartilaginous fish, is nearly three times the size of a Great White. The general gist is the same though: Jason Statham and his team - including Rainn Wilson and Ruby Rose - set off to stop the Meg from eating too many people, while being juuust slow enough to make sure a few do get chewed along the way for entertainment purposes. The result is the kind of film that appears aware of good taste and sense but has decided it’ll have far more fun without them. You may not get to see Statham punch the shark, but The Meg is sufficiently aware of its own absurdity not to jump it. Leon Hurley

3. Can the Slender Man movie deliver something more frightening that the real life tragedy?

You can understand why a movie studio would think that the Slender Man myth - brought to the attention of even the most internet phobic civilians by news coverage and an HBO documentary - would be a box office jackpot. The figure of Slender Man is undeniably creepy, and films have done wonders with much shakier premises. *cough* Truth or Dare *cough* My problem, as a full-time mistress of the macabre, is that I just don't think a fictional tale of young girls taking on the monster can ever compare to the tragic murders that happened in the real world. Obsessed with the fictional creepypasta creation, two 12 year-old girls stabbed a friend 19 times and left her to die, and were sentenced for their crimes earlier this year. The sad details of that story, and the footage of the police interviews, seem far more frightening than anything Hollywood can churn out. Rachel Weber

What: Slender Man
Where: Movie Theaters
When: August 10

After its exclusive multiplayer beta on PS4 last week, Call of Duty: Black Ops 4 is opening up to both PC and Xbox One players for another weekend-long trial of running and gunning, with the former version open to everyone from August 11, and not just those who pre-ordered the full game. So far, reception has been somewhat mixed to the first multiplayer-only Call of Duty, as the community’s already found plenty of imbalances to rally against, such as the new body armour feature significantly lengthening the series’ traditional time to kill. But betas are there to be broken, of course, and hopefully Treyarch can take all of this feedback on board - the good and the bad - to polish Black Ops 4 up to perfection in time for its full release on October 12. When Red Dead Redemption 2 and Battlefield 5 are releasing in the same period, this Call of Duty game can’t afford to make any big slip-ups. Alex Avard

5. Bethesda and Id have transformed the shooter landscape over the last few years. At Quakecon 2018, they might just evolve it again

It's almost strange at this point to consider how alien the likes of Wolfenstein and Doom were to the FPS landscape at the start of this generation. After ten years primarily dominated by increasingly prescriptive, increasingly controlled modern military shooters, the fast, furious, fluid, player-driven carnage of Wolfenstein’s New Order reboot was a raucous, inventive, lighting bolt to the core of FPS. And in 2016, Doom changed everything forever. For the second time since 1993. Since Id's grand comeback, the quick, creative, expressive and kinetic fundamentals of 'old school’ shooters have steadily become normalised again, integrating with the modern landscape for the good of everyone. But now it's time for phase two. At Quakecon this year, we're going to get our first look at Doom sequel Doom Eternal. We're going to get a closer study of the rampant, post-apocalyptic, open-world punk chaos of Rage 2, which blends Id’s shooting with the peerless world-building of Just Cause studio Avalanche. And we're all also going to see more of Fallout's next evolution, by way of a deeper presentation of Fallout 76’s multiplayer innovation. Bethesda and Id have set the standards for first-person action games this generation. Quakecon 2018 might just be the moment they start to build something brand new on that foundation. David Houghton

What: Quakecon 2018
When: August 9 to August 12
Where: Dallas, Texas, and livestreamed online

6. The final chapter of Telltale's The Walking Dead is here, but can it live up to the glory days of Clementine and Lee?

There was a time when I considered Telltale's The Walking Dead one of the best gaming narratives of all time. The first two seasons were spectacular. I played them on iPad, and never before have I been slumped over a piece of tech in tears like that. RIP Lee, RIP. Those were the glory days of Telltale's zombie-themed adventure. The third season focused solely on Clementine, a little older, a little more scarred and occasionally with a baby in tow - not hers mind you - but it failed to find the same emotional power that it had with the first two seasons. I, along with many other gamers, were suffering from Telltale fatigue (Telltale will remember that), and where The Walking Dead needed a great story to lift it beyond that, it never managed to quite achieve such heights. This final season then, has quite the heavy weight lying upon it. Hopefully it can round off what's been two out of three seasons of greatest with a conclusion that's worthy of those opening episodes. Watch these first 15 minutes above, then download it come August 14, and just come keep your fingers firmly crossed with me. Sam Loveridge

What: Telltale's The Walking Dead: The Final Season
When: August 14
Where: PS4, Xbox One and PC

7. Overwatch Summer Games is back, but in reality it's all about the skins, isn't it?

Overwatch's annual summertime event is in full swing, bringing a plethora of fun new skins, unlocking the old ones for a limited time, and inviting players to compete in the Rocket League-style antics of Copa Lucioball. If you've been away from Blizzard's team shooter for a spell, events are always a great time to dip back in, with the whole game and community feeling invigorated by the fresh costumes, highlight intros, and victory poses to covet. Which begs the question: which of the new Overwatch Summer Games skins are you after (all of which can be seen in the video above)? I always feel reluctant to buy loot boxes or spend up my precious Credit savings, but Moira's tennis serve Highlight Intro sure is tempting, and the baseball-themed outfits for Zenyatta and Winston's are excellent. Oh, and the casual digs on Cabana Ana seems like a must for any Ana mains - those shades are just too killer. Lucas Sullivan

There was a point in our review when our resident NFL expert, Bradley Russell, deemed Madden 19 worthy of sitting on the series' Mount Rushmore. That's high praise indeed, but when an entry like this arrives it needs all the praise it can get. Many were concerned that Madden would take a knee this year, letting a year wash over them with minimal improvements, but that is absolutely not the case. while this is a game reserved in its bells and whistles, it has managed to make the football the absolute start of the show, and all the improvements that lie within it, making it the game that Madden fans have been dreaming of us. With other sports games almost upon us, including the likes of FIFA 19 and PES 2019, it'll be interesting to see if they can pull of the kinds of innovation, and dedication to the sport, that we've seen in Madden 19 this year. Sam Loveridge