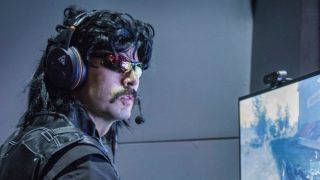 Guy "Dr Disrespect" Beahm is one of the biggest Twitch game streamers in the world, and today he was forced to end his live session of the Call of Duty: Black Ops 4 battle royale beta after what sounded like gunfire was directed at his home.

"I've got to end the broadcast right now, someone shot at our house," Beahm says on the stream after removing his trademark Dr Disrespect wig and glasses. "Broke the fucking upstairs window. This is the second shot, someone shot yesterday, at our fucking house and someone shot again right now, connected with the house, upstairs."

He has since has since updated the subtitle on his Twitch stream to reassure his viewers, so it now reads "Doc and Family Are Safe. Proper Measures are be taken while stream is down for the day." We'll update this story if Beahm chooses to share more information about the incident, or if there is an official statement from law enforcement.

36 year-old Beahm has around 2.5 million followers on Twitch, and won the Trending Gamer award at The Game Awards in 2017. He is best known for streaming battle royale games, and for sharing details of his marital troubles on his stream.