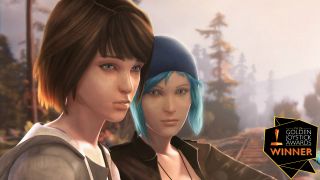 DONTNOD Entertainment’s story-rich adventure, Life is Strange has won the outstanding contribution award at the 2019 Golden Joysticks Awards. The French-based studio has released several games and DLC in the Life is Strange series that are celebrated for their exploration of heavy topics surrounding teenagers in modern America.

"The fact that the jury and the organization of the press wants to push games to talk about other subjects, I think it's really something strong for us," says Raoul Barbet. "Having this community that shows us by letters, by mail, by gifts, how they have been moved and how these games can help them in their everyday life, I think that is something quite strong for us as creators."

Life is Strange follows the life of Max Caulfield, an 18-year-old photography student who discovers that she has the supernatural ability to rewind and change time. After being reunited with her childhood best friend Chloe, the two try and stop an oncoming storm that will destroy the town and are caught up navigating the dark underbelly of Arcadia Bay. The player is faced with a number of critical decisions that affect the story and the outcome of the game.

Life is Strange is celebrated for placing two young women and their relationship at the heart of their game. DONTNOD has continued to tackle the experiences and struggles of young adults through all the Life is Strange games including their DLC, Before the Storm, the expansion The Awesome Adventures of Captain Spirit and in Life is Strange’s sequel.

Life is Strange 2 tells the story of two brothers who are forced to run away from their home and their journey trying to reach the border to Mexico. The series touches on themes of education and family but also delves into the heavier topics of racism and police brutality.

Writer and director Jean-Luc Cano admits he was emotional about the entire experience, saying immediately after receiving the award, "It was really difficult to make the first Life is Strange because no one believed in this game at the very beginning. And now we have the support from Square Enix to do another one, deal with more political subjects and more difficult tops and it's really great to have this award for all of this."

From the very first game, the Life is Strange series continues to tell emotional and engaging coming of age stories. The season finale of Life is Strange 2 is set to release in December.