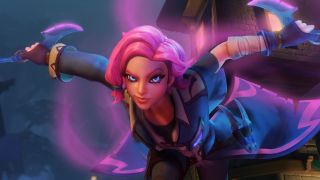 The world could always use more hero shooters, and console players finally get to try out Overwatch competitor Paladins starting today. The free-to-play game from the creators of Smite has extended its open beta to PS4 and Xbox One, after debuting on PC last year.

If you haven't heard of Paladins before, it's a shooter where teams of players pick cartoonish heroes with unique powers to fight over objectives. Yeah, it does have a lot in common with Overwatch, but hey! It's free-to-play. And beyond the fundamentals, they diverge appreciably - Paladins has a MOBA-like rapidly expanding roster of heroes, for instance, and you can customize their abilities with special cards. You can unlock heroes and cards through microtransactions, as you would expect.

The open beta debut is accompanied by a new cinematic trailer, showing gremlin D.Va chasing a gemstone through a hectic battle. Sorry, did I say gremlin D.Va? I meant goblin Ruckus.

Check out the 11 weirdest abilities in Paladins if you want some strange places to start.