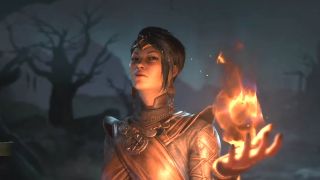 Diablo 4 is bringing back the popular Elective Mode from Diablo 3, which allows you to decide which skills are assigned to which buttons on your controller or keyboard. As promised, Blizzard is keeping the community up-to-speed, and asking for their involvement, on how the studio makes key decisions in Diablo 4's development.

The new and rather-lengthy Diablo 4 development update from lead systems designer David Kim makes note of the community's questions about Elective Mode, shutting down the notion that Diablo 4 will lock skill categories to specific slots. "Like many other things in the demo, the UI is not final and we will support Elective Mode-style skill selection. Skill selection and assignment will always be completely open for all players," writes Kim.

The update also echoes the sentiment by many in the community that ancient items, at least as they are in Diablo 3, wouldn't be welcome in Diablo 4. While Kim says Blizzard is one the same page as the community regarding ancients, he didn't go as far as to say they won't be featured in Diablo 4. Instead, Kim writes that the studio is incorporating feedback by "revisiting" designs for ancients and promises more info to come.

The post also gives insight into the debate going on at Blizzard around finite vs. infinite progression systems, and it sounds like the topic is still up in the air. Kim acknowledges the concern with infinite systems that they can create a situation where power from sources other than the leveling system becomes obsolete. "However, we can control how much power each system gives, whether it’s infinite or finite," writes Kim.

Kim also touches on sources of power and keyed dungeons, imploring the community to respond with feedback. It seems Blizzard remembers all-too-well some of the negative feedback they saw after Diablo 3 released, and they seem determined to learn from their errors. We can't wait to see if they're successful whenever Diablo 4 launches.

In the presumably long wait before then, catch up on the latest and greatest games on the cheap with our guide to the best Black Friday game deals.