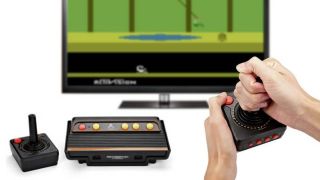 I’d say they "don’t make ‘em like they used to", but this deal would make me a liar. You see, the Atari Flashback 8 Gold Classic Game Console bundle is currently on sale at Argos for just £28. That’s a mighty reduction of £52 and is well worth your time - especially considering the fact that it’s one of the best retro game consoles currently on shelves. In fact, this throwback nabbed the number 3 slot on our list over the Sega Mega Drive and the NES Classic. Which tells you pretty much everything you need to know, to be honest.

A loving remake of the Atari 2600 (which landed back in 1977, by the way), this bundle manages to cram in two wireless joystick controllers and 120 built-in games. That’s generous by any stretch, particularly because it includes classics like Space Invaders, Pitfall!, Kaboom!, and River Raid. More importantly, you can also revisit them in 720p HD via HDMI cable (and there’s even the option to add in retro scanlines to your screen, too).

Atari Flashback 8 HD Games Console | £28 at Argos (save £52)
Bathe in the warm glow of nostalgia and revisit the ghost of gaming past with this bundle. Just be prepared for devious levels of difficulty - the Atari 2600 was as hard as nails. View Deal

However, this isn’t the coolest feature. That honour goes to the rewind, pause, and save options that have been added for good measure. As well as being able to halt the action mid-game, you can also buzz things back if you happen to go wrong. Which you will. Because damn, games were hard back then.

Seeing as this is a clearance item, it isn’t likely to be around for long. As such, it’d be a good idea to jump in now if you want to avoid disappointment.