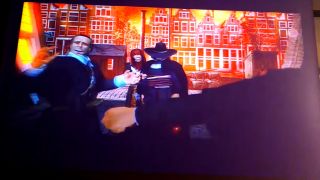 For years, 1666: Amsterdam has been associated with the THQ bankruptcy and the legal struggles between Ubisoft and Patrice Desilets. But there was an actual game in there too, and now we have video evidence to prove it. Game developer Brandon Sheffield posted more than four minutes of recorded-off-screen footage of the game, which Desilets apparently demoed at the Reboot Develop conference in Split, Croatia last week.

According to Sheffield, this version of the game was being developed for PS3 and Xbox 360, though it would have been brought up to current-gen systems if Ubisoft hadn't spiked the project after firing Desilets (who was the creative director for Assassin's Creed and Assassin's Creed 2).

The theme for 1666 was "be worse than the devil", and that cloaked figure is doing some professional-grade devilry. He possesses ravens, rats, and cats to sow havoc in the streets and wields some kind of alchemical rod to beat down fools and start a massive fire. The new art that Desilets teased for 1666 last week seems to show the same fiendish fellow, along with a creepy red-eyed man and other demonic imagery, though some of the other concepts have probably changed over the years.

Desilets' team at Panache Digital Games is already busy working on an episodic adventure series titled Ancestors: The Humankind Odyssey, so I wouldn't expect to see much more of 1666 until that gets underway.