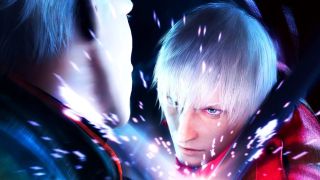 The Nintendo Switch release of Devil May Cry 3 will modernize the 15-year-old game by adding in the style changing featured in later games in the series.

This follows a tease from producer Matt Walker who took to Twitter to promise DMC fans some news on the action masterpiece Switch port in the coming weeks.

Eagle-eyed fans then noticed that the game's official website listed a new 'Style Change' system for the game. While in Devil May Cry 4 and 5 you can swap styles on the fly, Devil May Cry 3 originally locked you into a fighting style at the start of each level. As you can imagine, style changing allows for much more creative and extravagant combos, and it was one of the biggest improvements made in the fourth game. Devil May Cry 3 is widely regarded as the best game in the original trilogy, at least from an action standpoint, and the addition of style changing can only improve it.

The question for me is how this new system will use the many styles in Devil May Cry 3, which has more styles than any other game. It has the same base styles as the other games - Trickster, Swordmaster, Gunslinger, and Royalguard - plus the Quicksilver and Doppelganger styles gained from defeating certain bosses. Will players be able to equip all six styles at once, or perhaps substitute base styles for special styles? Devil May Cry 4, for example, added a fifth Dark Slayer style which could be accessed by essentially double-tapping your currently equipped style.

Of course, even if it only uses the base styles, style changing will still be huge for Devil May Cry 3 on the Switch. And with this being the game's seventh release, it's nice to see it get more than a fresh coat of paint this time around.

For the unlucky few who still haven't played Devil May Cry 5, here's everything you need to know about Dante's latest.