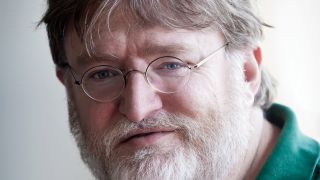 Gabe Newell is infamous for being a bit of a recluse, often appearing in public only to make the briefest of statements and avoid that question. But today, he'll take to Reddit for an Ask Me Anything (AMA) session starting at 3pm Pacific / 11pm GMT, giving you the chance to speak directly to the man in charge of Valve.

It's interesting that Newell has chosen now to make himself available. Last week, Game Informer published an interview with an alleged Valve insider who claimed that Half-Life 3, the white whale of the video game world, never got particularly far in development and would probably never happen. Correlation does not equal causation, so it's probably more coincidence than anything… or is that just what Valve wants us to think? No, no, it's probably just a coincidence.

Whether you want to ask Newell about Half-Life 3, his favorite hero in Dota 2, or anything else, you might want to bookmark r/The_Gaben and watch that sub-reddit when the AMA starts.