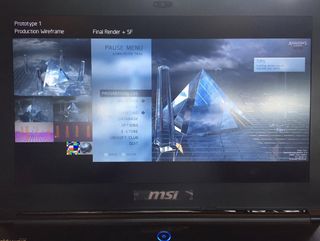 As ever, we might have an Assassin's Creed leak on our hands. It can't be easy to keep track of everything as multiple global teams tackle the projects but it looks like this leaked screen confirms the rumoured ancient Egyptian setting.

While there's plenty of questions regarding authenticity, there's no mistaking that the image on screen is a pyramid, in keeping with the suspected time period of the reportedly codenamed Assassin's Creed Empire.

The shot's arrived via the Twitter account of Nibel, who seems to be on the inside track for just about everything gaming related.

In terms of the screen itself, the name 'Peter Tran' is listed as the admin on screen. That seems to point in several places to a Montreal based 3D artist but there's little to go on. His resume's empty and he doesn't seem to have a complete online presence.

On the pro side it is a very similar menu screen to that of Assassin's Creed Syndicate, complete with skills, crafting and a database. But maybe too similar. Would the game still be using the old fonts and systems if the new Assassin's Creed might not be out in 2017.

It's possible the old text style and menu could be placeholder, but the very similar art style and the almost, but not quite, existing name attached means I'm wary for now.