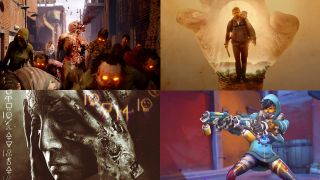 1. State of Decay 2’s release gives Xbox One owners an exclusive to be excited about

It’s been a tough couple of years for the Xbox One. Despite a laudable pivot to customer-friendly services, from the Backwards Compatibility programme to the amazingly valuable Xbox Game Pass, Microsoft has struggled to keep up with Sony’s confident stream of stellar PS4 exclusives. State of Decay 2 isn’t going to change that, but it is a step in the right direction, as Undead Labs’ follow up to its Xbox 360 indie hit is another compelling zombie sim which doesn’t compromise on its creative ambition. Not only that, but those who own the Ultimate Edition can starting playing four days early (starting today!), and it’s the second big exclusive title (following Sea of Thieves) that Xbox Game Pass subscribers can download and enjoy at launch. Surviving the rapture has never been so cost-effective. Alex Avard

What: State of Decay 2
Where: Xbox One and Windows PC
When: May 22 (Out now for Ultimate Edition owners)

2. (Yet) another Fortnite competitor enters the console area with H1Z1 Battle Royale

If you didn't already know, Fortnite is just a tiny bit popular. It boasts just a few millions players every single day, and because of that success you can bet there are a ton of other battle royale games popping up all over the place... including Black Ops 4. Well, until that arrives in October, there's another battle royale game looking to garner some attention on PS4 from May 22: H1Z1 Battle Royale. Like Fortnite and even PUBG, H1Z1 started out its life as a very different game indeed - a survival zombie shooter. But now a free-to-play beta for its new Battle Royale mode is coming to PS4, and sits comfortably on the battle royale spectrum between the colourful silliness of Fortnite and the hard FPS-like PUBG. It also comes with an added string to its offering bow, in the form of its Auto Royale mode, which pits 30 teams of four against each other in a kind of Mad Max Battle Royale mode. They all sit in a car, one drives and collects power-ups and gear crates as they go, and the others lean out the window and shoot other teams careering around the map. It's brilliant fun and worth a cheeky download on PS4 soon. Sam Loveridge

3. Battlefield 5 is about to be revealed, but are those Battle Royale rumours really true?

After much industry whispering about a World War 2 setting and an in-the-works Battle Royale mode for the next Battlefield game, it looks like EA and DICE are all set and ready to officially reveal the latest instalment in the shooter franchise on May 23 next week. The announcement comes after Battlefield 1 players spent days solving a curious in-game Easter egg leading to the discovery of this website. Its tagline, “Never Be the Same”, is a promising one, but how is Battlefield going to change in the golden age of the battle royale genre? And can DICE come back kicking after its stumbles with last year’s controversial Star Wars Battlefront 2? My trigger fingers are crossed, but I guess we’ll all find out on Wednesday 23rd May… Alex Avard

What: Battlefield 5 reveal
Where: https://www.ea.com/neverbethesame
When: May 23 (1pm PST/9pm BST)

4. Call of Duty: Black Ops 4 is officially lacking a single-player campaign, which could see a lot of players signing off

in case you missed it, the full Call of Duty: Black Ops 4 reveal happened this week and it showcased some major changes to the series. For the first time, a Call of Duty game is launching without a single-player campaign, instead delivering story content through the medium of multiplayer, like some strange interpretive dance. And for me, that's a major issue. As much fun as I've had playing Call of Duty multiplayer over the years, it's the single-player campaigns that have kept me coming back year after year. Call of Duty 4: Modern Warfare is still one of the best video game stories of all time, and although the quality of COD single-player narratives have tended to fluctuate in recent years, there's still that sense of drama and action that I crave. But with BLOPS 4 we're not getting any of it, and for me that could be a major problem, to the point that I might not splash the cash on COD this year. Yes we're getting Black Ops 4 battle royale, and loads more Zombies, but for me I'm already getting both of those things elsewhere, and sometimes for free thanks to games like Fortnite. For me, adding what Treyarch is calling a "narrative wrapper" to multiplayer just might not be enough to bring me back to Call of Duty for another year. But, let me know what you think about Black Ops 4's lack of single player by leaving a comment below, or reaching out on Twitter to @GamesRadar or to me directly @ApacheRose3. Sam Loveridge

What: Call of Duty: Black Ops 4 reveal
Where: Online and on GamesRadar
When: Right now

5. Will the Overwatch Anniversary 2018 event trigger a loot box overload?

To celebrate two solid years of Overwatch's persistent popularity and success since launch, Blizzard's doing a sort of 'greatest hits' event with Overwatch Anniversary 2018. In addition to a host of fresh content (sweet new skins, a Deathmatch Competitive Mode and map, and most importantly, dancing emotes for Doomfist, Moira, and Brigitte), the event also brings back all the cosmetics and special brawls from past seasonal events. It's great to see coveted, limited-time items made available again - but I worry that it might lead to increased rates of Loot Box Mania, in which players become increasingly agitated at being unable to open the specific costume they so desperately want. On the plus side, everyone gets a free, Legendary-guaranteed loot box just for logging in during the event; on the more nefarious side, you can attain another Legendary Anniversary Loot Box by buying the pricey 50 loot box bundle, and I have to wonder if that's repeatable to exploit those with looser spending habits. As more and more amazing skins are continuously added to Overwatch (huge credit to Blizzard's immensely talented art team), it's starting to feel increasingly dire that players can't just buy the skins they want directly, as with the commendable Pink Mercy skin, with all proceeds going to charity. Hopefully the Legendary Anniversary Loot Boxes won't highlight the stark reality of how low the odds are for you to get what you want from them, because that kind of money-sucking frustration would be a shame amidst what ought to be a merry celebration. Lucas Sullivan

6. Can Netflix put a new spin on the zombie movie genre with Cargo?

Despite their rather anti-social behaviour, zombies are pretty popular. More zombie movies, games, and TV shows come out every year and there’s even a growing zomromcom genre which is bigger than you think. While this is a good news for zombie lovers it also means the genre is pretty tired and creating a truly unique zombie movie today is almost impossible. Enter Netflix! The streaming service isn’t worried about oversaturation, it’s got a new zombie movie for us and, to be fair, it actually looks like it’s put a spin on the familiar undead story. What makes Cargo different? From directors Yolanda Ramke and Ben Howling, this Netflix Original follows Martin Freeman after he’s been infected by his now deceased zombie wife. Stranded in rural Australia and knowing what he’ll soon become he desperately tries to get their baby daughter to safety before he turns into a zombie and… eats her. Sounds pretty harrowing, doesn’t it? Despite the monster horror aspect to this tale, the Cargo trailer actually make it look like an emotional survival film - one which will have us crying buckets no matter what the out come, no doubt. Sign me up! Lauren O’Callaghan

What: Cargo
When: May 18
Where: Netflix

7. The latest Pokemon Go Community Day will finally let you get your Charizard

I've basically been playing Pokemon Go on and off since it first launched two years ago, but there's one rather important Pokemon that continues to evade me. Charizard. Yes, that big orange dragon is just an absolute pooper to try and nab, mostly because its little fella Charmander is equally as tricky to find. Well, unless you get one and walk all the way to a Charizard, and who has time to do that. Thankfully  Niantic has heard my (and a load of other Pokemon trainers') cries and has made the  next Pokemon Go Community Day dedicated to the little fire lizard himself, Charmander. That means that on Saturday, May 19, you'll find tons of Charmanders just loitering about, waiting to be caught, put in the candy grinder and made into a beautiful - and hopefully shiny - Charizard. So go out there and get that elusive beast at last. Sam Loveridge

What: Pokemon Go Community Day
When: Saturday, May 19
Where: In and around your local area

8. Hyrule Warriors: Definitive Edition on Switch lets you experience the massive Legend of Zelda battles you missed on Wii U

Hyrule Warriors originally appeared on the Wii U back in 2014, then was ported to the 3DS in 2016, and the years of refinement and additional content mean that this latest Switch version is deserving of its Definitive Edition tag. If you missed out on the previous iterations, Hyrule Warriors is basically a hack-and-slasher similar to the Dynasty Warriors series, but featuring characters and settings from the Legend of Zelda games. Battles are not just a case of slashing your way through waves of opponents though, as you'll also need to capture castles to gain control over the battlefield, beat important enemies to send their armies into retreat, and help out your allies to boost their morale and keep them fighting. With a new co-op play mode, all 29 playable characters from previous versions of the game, plus all of the premium DLC and new outfits based on Zelda: Breath of the Wild, there's never been a better time to give Hyrule Warriors a go. Iain Wilson

What: Hyrule Warriors: Definitive Edition
Where: Switch
When: Out Now

8 Things to Watch is our selection of the week's best games, movies and TV with a new update every Friday - let us know what you're looking forward to in the comments below