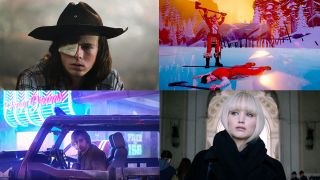 1. Will The Walking Dead's midseason premiere really say goodbye to Carl and stray from the comics?

Things weren't looking too good for Carl Grimes during the season 8 midseason finale, when it turned out he'd been hiding a zombie walker bite. The show's internal logic suggests a slow-but-certain death and the midseason premiere should play out like a bittersweet tribute to one of the show's longest-serving cast. That said, some conspiracy theories explore how Carl might survive and creator Robert Kirkman teased that 'Carl might not die' in a recent Q&A. Either way, Carl's bite is a major deviation from the comic book lore that the show has followed so slavishly – and there's fresh hope that the The Walking Dead can a) surprise and b) stop being so infuriatingly meandering. Carl's fate, live or die, is bound to play a key role in the show's biggest rivalry, since big bad Negan is almost as fond of Carl, as his father Rick. For the good of The Walking Dead, Negan needs to die quick (so they can do something, anything better)… or allow Carl's survival to act as hope of a cure, leading Rick and Negan to call a truce. It won't be either of those things, if you've read far enough in the comics to know of The Whisperers, but you live (or die) in hope. Dan Dawkins

You can now rob a bank while sat in a bank. Don’t, obviously. Rob a bank that is. Unless you are playing PayDay 2 on Switch… You get the idea. The four player heist-em-up is now on Nintendo’s handheld / home console meaning you and three friends can finally work together to neutralise alarms, take hostages and try to get away with the loot on the go. A new local play version of it’s CRIME.NET multiplayer means you can all link up in the same room to perform your carefully planned robberies across a range of locations. As well as making a life of crime more portable the Switch version introduces a new character called Joy, complete with her own mask and weapons. Leon Hurley

What: PayDay 2
Where: Nintendo Switch
When: February 27

3. Netflix has its second go at cyberpunk in a month, but how does Mute compare to Altered Carbon? And is it the homegrown hit Netflix needs right now?

Realistically, there’s not too direct a comparison to make. While both Altered Carbon and Mute play out in Blade Runner inspired, futuristic cities, Netflix’s new movie is an altogether more restrained affair. It’s barely a science fiction story at all, really, and more of small, intimate detective story taking in a few interestingly sketched characters on the fringes of mainstream life. Some critics, for my money, have been surprisingly harsh on Mute – perhaps, between the recent mixed response to Altered Carbon, and the debacle of The Cloverfield Paradox, it’s just Netflix’s turn to take a kicking. It’s not perfect, but it’s definitely a classier and more focused production than this month’s other big cyberpunk extravaganza. We are though, hitting the point where Netflix’s original movie content certainly needs to deliver a resounding, unambiguous hit. Its recent attempts to piggyback on Hollywood’s offcuts are doing it no favours. David Houghton

What: Mute
Where: Netflix
When: Now

4. The Darwin Project open beta on Xbox and PC will show if Fortnite has a competitor

Cast your mind way back to E3 2017 when Microsoft revealed The Darwin Project. At the time PUBG was around but not huge, and Fornite had yet to explode with its own Battle Royale mode. Now, PUGB is waning, and Fortnite seems to add another few million players everytime you blink. This weekend’s open beta for The Darwin Project will let us see if there’s another player on the last man standing block with it’s cartoony looks and clever ideas. It’s got a few tricks that might just give it an edge, with gameplay built around tracking and exposing rival players - everything you do leaves a clue, and other players can find these to highlight opponents on the map. It also takes place in a freezing world meaning you have to fight hypothermia as well as each other. And those fires can be seen for miles. Leon Hurley

What: The Darwin Project
Where: PC, Xbox One
When: February 23 to February 26

Fortnite Battle Royale has exploded into a multiplayer sensation over the last few months, but by now you might feel like the Hype Train has already pulled away from station and it's too late to hop on. Don't worry: Fortnite Battle Royale just entered its third season (along with its big 3.0.0 update) and there's never been a better time to start playing the game – or dip back in if it didn't catch your interest the first time around. There are new weapons to try and a bunch of cool outfits to unlock, not to mention an improved building system that should reduce your combat-construction flailing by at least 25 percent. As always, Fortnite Battle Royale remains free-to-play, so you might as well hop in now and see what all the fuss is about. Connor Sheridan

What: Fortnite Battle Royale Season 3
Where: PC, PS4, Xbox One
When: Right now

6. Is Red Sparrow the Black Widow movie we’ve been waiting for?

It’s not often that a new movie acts as a possible substitute for another which never even happened… but that might be exactly what’s happening with upcoming film Red Sparrow. Directed by The Hunger Games’ Francis Lawrence and starring Jennifer Lawrence, it tells the story of Russian ballerina Dominika who, through tragic circumstance, is forced to become a secret assassin for her government and realises that she’s actually very good at it. If her background sounds familiar to you, that might be because it’s very similar story to how Marvel’s Black Widow became an assassin and almost as soon as the Red Sparrow trailers started dropping, MCU fans hailed it as the Black Widow origin movie they never got. Why Marvel Studios hasn’t given Scarlett Johansson’s assassin-turned-superhero a spin-off movie yet is anyone’s guess, but with the release of Red Sparrow, we perhaps don’t need one anymore. Time will tell as reviews have ranged from ‘pretty good’ to ‘it’s boring torture porn which violates women’, but with its release just around the corner, we’ll be able to see for ourselves soon whether it’s the Black Widow movie we’ve been waiting for or if we need to start petitioning Marvel (again). Lauren O’Callaghan

7. Can Metal Gear Survive defy the haters with a survival game that plays like Don’t Starve with more guns?

While the messy Kojima-Konami divorce means the knives are out for the first Metal gear game without Hideo at the helm, it’s [whisper] not terrible. As the name might suggest, it’s all about survival and has a lot in common with Don’t Starve - both see you in mysterious other dimensions trying to grow food, collect resources and create a base full of crafting stations and vegetable patches. The best way to approach this is to get all thought of Metal Gear out of your head; treat it as a spin off at best. Its zombie-stabbing, base building, horde mode defense elements might not be original but it’s a surprisingly satisfying experience once you start growing potations and taping knives to broom handles. Leon Hurley

What: Metal Gear Survive
Where: PS4, PC, Xbox One
When: Out now

8. The Nintendo Switch is one year old. What has it achieved in that time? Pretty much everything

It’s borderline hilarious to look back on that first Nintendo Switch reveal video and remember all the sneering, doubtful voices. Their perspective was understandable at the time, mind, if a little short-sighted. After disenfranchising its core fanbase with the Wii, and soundly screwing everything up with the Wii U, it might have been easy to believe that Nintendo had well and truly lost its way. But to believe that was also to forget that Nintendo somehow always has a spare tank of genius in reserve, and that its best moves almost always come in response to its worst times. And so, the Switch achieved everything that the hopeful believed it would. It re-energised Nintendo’s first-party games offering by consolidating all resources around one, home-and-handheld platform. It blew that library right up by learning from Sony’s Vita and courting great indie games left, right, and centre. It sold, sold more, and it continues to sell, and Nintendo is now in the best critical and commercial position it’s been in years. In fact, the Switch now very mch feels like a summation of all the best years of Nintendo, from NES to the motion-control era, with pioneering creativity built around a solid structure of honest, brilliant, engaging, pure game design. Having gone from The Legend of Zelda: Breath of the Wild to something like Labo in under 12 months, the Switch’s future is frankly unfathomable. David Houghton

What: The Nintendo Switch’s first birthday
Where: Everywhere
When: March 3

8 Things to Watch This Week picks the best games, movies and shows of the next seven days every Friday at 9am PT / 5pm GMT