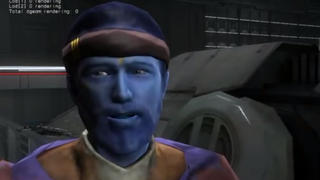 It's clearly unfinished, with janky animations, camera work, missing sound effects, and almost non-existent lighting and shading. Still, if you want an extended look at what could've been, this is the video for you.

Unlike what we see here in Star Wars Battlefront 3, EA and DICE's most recent entry in the franchise lacks a single-player campaign. Hopefully the sequel - which will feature content from the newest set of films - will remedy this omission.