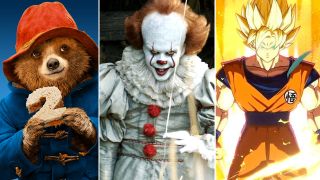 With diets and new gym regimes taking over our everyday lives, you can stave off the January Blues with our round-up of the best games, movies and TV over the next seven days. From the irresistible charm of Paddington Bear, to escapist survivalism in Zombi on Games with Gold, or the unexpected delight of 76 year-old thespian Miriam Margolyes befriending Chicago gangsters, here's our pick of the 8 things to watch out for this week.

Find out why the Versace estate are objecting to the new crime show from the creator of American Horror Story and The People v. O. J. Simpson

The Versace estate has already made their objections to the The Assassination of Gianni Versace: American Crime Story known, but won't make it any less of a must watch for true crime fans. Penelope Cruz serves us fashion royalty realness as Donatella Versace, while Glee star Darren Criss stars as the serial killer that stole the life of fashion designer Gianni. The fact the Ryan Murphy is exec producing means you can count on fabulous set design, coal black humor and one liners sharp enough to slice through silk. If you haven't watched his previous take on the OJ court case - starring the incredible Sarah Paulson - now's the time to binge it. Rachel Weber

What: The Assassination of Gianni Versace: American Crime Story
Where: FX
When: Starts January 17

After the blockbuster climax to last year's movie releases, with Star Wars: The Last Jedi splitting fans and inflaming social media, you wouldn't be blamed for embracing a gentler cinema experience to start 2018. Which is why I’m recommending Paddington 2. Those in the UK who have already seen the sequel (it came out in November 2017 tea-side) can attest to the sheer glorious feel goodness of this flick about a bear who loves marmalade sandwiches; a thrill for children and adults alike. With him dropping in cinemas today, it’s the perfect film to ease you into your 2018 viewing, and once you’re ready for something a little more meaty, check out all the best upcoming movies of 2018 coming your way soon. Lauren O’Callaghan

What: Paddington 2
Where: In theatres
When: Now

You can make an argument for any of the heroes in the Final Fantasy games being ‘the best in the series’, but the only way to prove it is to make them fight. Well, that's what Square Enix are hoping, at least. Final Fantasy Dissidia NT lets you pick characters (both heroes and villains) from the legendary RPG series and take them into a 3 vs 3 battle arena. Which means we can finally pit Noctis, Cloud, Zidane, Tidus, Firion and Lightning against each other. Or make them team up to fight the bad guys. If you can’t get a full team of three together online there’s the option to swap in computer controlled allies or opponents, so even if you’re playing alone you can still take Cloud to get his revenge on Sephiroth for killing Aerith. Oh. Spoilers. Sorry.

Good news: if you like what you play, you don’t have long to wait for the full game. It's already out in Japan but the rest of us can get our hands on it on January 30th. James Jarvis

The Dragon Ball FighterZ open beta calls all weekend Z Warriors, in the series' most thrilling video game adaptation yet

Fighting game enthusiasts are already hyped for the upcoming debut of Dragon Ball FighterZ, so let me make the case for this weekend's open beta to everyone else: if you ever watched Dragon Ball Z, this is almost all of that perfectly recreated in accessible anime fighter form. Take one look at a trailer and you'll see the stunning degree of faithfulness Arc System Works' visuals and overall aesthetics. Thankfully, FighterZ also knows where to diverge from the source material to make a better game; for instance ,you can put normal-human Yamcha and actual-god Beerus in the same arena without the former being instantly annihilated (again). There's also slightly less extended shouting. The full game will be released on January 26, so make sure you give it a free try-out while you can. Connor Sheridan

Miriam Margolyes’, the 76 year-old thespian and ex-Harry Potter star, is arguably the most watchable, human, presence on TV. Miriam’s Big American Adventure sees her touring the central states of Trump’s USA; a country where she used to live, but no longer understands. Miriam’s honesty and self-deprecation – I’m a ‘fat old jew’ who is ‘absolutely capable’ of shooting someone, she reveals – isn’t the show’s highlight, but rather how she disarms, confronts and empowers those around her, from republican sheriffs to convicted murderers. It’s an absurd joy to see Miriam greeted by a Chicago gangster with the words “I’m a huge fan of Harry Potter”’. It borders on the profound, too. Miriam meets two convicted drug addicts, who feel society never game them a chance. “There is light. I’m not going to say it’s Jesus. Because I don’t believe in Jesus. But I believe in you”, Miriam tells the women, barely in their 30s. Their tearful, joyous, reaction to such kindness is as raw as TV gets. “I’m sorry Louis Theroux, but Miriam Margolyes has just stolen your crown as the best British human interest documentary maker.” notes one Twitter user. In moments like this, it’s hard to disagree. Dan Dawkins

What: Miriam’s Big Adventure
Where: Watch it on BBC iPlayer (UK). US viewers might want to investigate the Best VPN Deals to access iPlayer.
When: The first two episodes are available now, with the concluding episode due on 24th January on BBC One (UK) – time TBC.

Some games just shouldn’t be missed when they’re free and the perma-death survival sim, Zombi, is one. Set in a London ravaged by an undead apocalypse, this is a fun and scary first person horror. Obviously there’s a gimmick - when your character's dead, they’re so dead. Well, undead. Leaving you with no option but to start again, making sure you visit your now rotting former self to put them out of their misery and nab all their stuff. It’s a super interesting idea to see the previous you as a walking corpse and then charge in swinging a pipe, but its how it transforms the game that makes this great. It’s already a scary, atmospheric experience built around scavenging and fighting, but that ‘one slip up and you’re dead’ element raises the tension to almost stressful levels. The very English backdrop of buses and Buckingham Palace also make a great change from the usual American zombie apocalypses. Leon Hurley

PAX South is happening this weekend, running from January 12 - 14, but not all of us can trundle on down to San Antonio, Texas to see all the excitement. Whether it’s checking out all the awesome cosplays to settling down to absorb the genius from the various talks throughout the show, there’s plenty to be sad about missing out on. But thankfully, there’s a PAX South Twitch channel that’ll bring you all the biggest news from the show live as it happens, including talks from Owlchemy Labs (of Job Simulator fame), chats about launching your own streaming channel, live feeds of the Omegathons and even a talk about how to become a Pokémon Master on the Sunday. We’ll be there, in our PJs with a cuppa watching on Twitch. Sam Loveridge.

It’s ok, you’re allowed to admit it. You didn’t watch It in the cinema because you were too scared. The solution? Letting Pennywise right into your front room. Hey, at least there’s cushions there. Even if horror isn’t normally your (blood) bag, this Stephen King adaptation just demands to be seen. With some great performances from the central ‘Losers Club,’ there’s a Stand By Me quality to the movie as the children form close friendships amongst the terrifying scares. And yes, they are truly horrifying. It was one of 2017’s scariest movies and the bonus is that because It can be anything as it shapes specifically to your fears, everyone will find something to haunt their dreams. It’s nightmare time. In the best possible way. Louise Blain

What: It
Where: Home release on VoD, Blu-ray and DVD
When: January 15