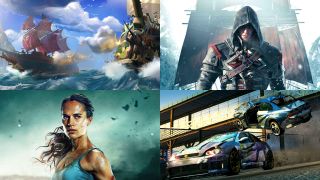 1) Sea of Thieves takes Rare, and maybe all of online gaming, into uncharted waters – but how long will the adventure last?

Just a few years ago we were wondering when Rare would stop making Kinect Sports sequels and start doing original projects again. The 32-year-old studio will deliver on Tuesday when Sea of Thieves, its long-awaited online pirate game, finally raises anchor and drops sails for its full release date. Several beta tests have given players the chance to try out the fundamentals but big questions remain about how long Sea of Thieves' uniquely ahistorical recreation of the pirate life will keep players captivated. This is just the beginning of a new chapter for Rare, and as a big fan of playing shanties and blasting myself out of cannons, I hope it's a long and fruitful one. Connor Sheridan

What: Sea of Thieves
Where: March 20
When: Xbox One and Windows 10 PC

2) Fortnite on mobile invites you to play with PC and console gamers, as cross play goes mainstream

Just in case you didn’t think Fortnite’s Battle Royal mode wasn’t big enough already, it’s heading to mobile. Email sign ups are live as we speak, with Epic promising downloads will appear ‘later in the week’. The few glimpses we’ve seen show the full 100 player game running on phones, using virtual on-screen analogue sticks to move and shoot. It’ll also be cross play, bringing mobile players into console and PC games, although God only knows how that will balance out. It’s currently only on iOS, online only, and  you’ll need iPhone 6S/SE, iPad Mini 4, iPad Air 2, iPad 2017, iPad Pro devices or later, running iOS 11. Android users are promised a look in some time in the next few months. Leon Hurley

What: Fortnite Battle Royal mobile sign up
Where: Mobile (iOS)
When: Now

3) Tomb Raider is finally out in cinemas, but is its video game style structure really a cause for criticism?

Lara has been reincarnated once again for the big screen, this time with Alicia Vikander of Ex Machina fame taking on the role of the Tomb Raider. When photo of her in costume first surfaced it was uncanny how much she looked like Lara from the rebooted Tomb Raider game series, but now the movie is in cinemas critics such as Screen Rant, IndieWire and AV Club seem to be torn over whether it’s too similar to the video games. Trouble is, if you watch any movie with a video game structure in mind you can practically see quest objectives tick off at every major plot point. Many critics have been using the video game comparison as a not-so-veiled insult, but ignore their grumbles and find out for yourself if it’s really as bad as they seem to want it to be – our review, via Total Film magazine (link below), is slightly more optimistic. Zoe Delahunty-Light

What: Tomb Raider movie
When: Out now
Where: Cinemas near you

Wait, you didn’t think you’d get all the way to Ancient Egypt without fighting some mummies did you? Good, because Curse of the Pharaohs has landed for Assassin’s Creed Origins, and it turns out dead royalty really don’t like it when you steal from them. In fact, they’re so narked that someone’s nicked their gold trinkets that they’ve come back from the dead, sent an army of shadow versions of themselves to haunt (read kill) the living, and it’s up to our old friend Bayek to travel to literal hell and back to put them to rest… again. Thankfully each pharaoh’s version of the underworld is totally different, and regularly beautiful, so you won’t mind heading down there too much. Just watch out for the giant scorpions and the harpies. The DLC pack is absolutely huge too, with the new areas to explore like Thebes and the Valley of the Kings proving tons of side quests, new weapons and armour, and even undead mounts too. It’s free for Season Pass holders, but available to buy as a standalone purchase too. Sam Loveridge

What: Assassin’s Creed Origins - Curse of the Pharaohs DLC
Where: PS4, Xbox One and PC
When: Out now

5) BBC2’s sitcom Mum might be the best show since the The Office to capture the humour, passive aggression and stifling repression of British life

There are moments, during BBC Two’s subtly affecting sitcom about suburban English life, when it’s all you can do not to bawl at the screen in frustration. Cathy is a 60-year-old widow, played with charming restraint by academy award nominee Lesley Manville, who lives with her despairingly naive adult son Jason, and his effervescent girlfriend Kelly; who makes Jason looks responsible. The show’s set in their suburban semi-detached home – much like Channel 4’s acclaimed Friday Night Dinner – with a fabulous rotating cast of guests: like sweary pensioners Reg and Maureen (Cathy’s former husband’s parents), would-be suitor Michael and wickedly deluded social climber Pauline (and her downtrodden husband Derek). The tension –
and tenderness – between all parties is played out with an asphyxiating level of indirectness and micro-aggression. Mum’s observations on British life – and its obsession with class – are withering yet tender: Pauline refuses to be seen in a Toby Carvery (while waiting in a huff in her Ford Ka); Derek, Michael and Jason jostle awkwardly around a barbecue in light drizzle; Kelly’s mum is revealed to be a vain idiot who boasts about her 23 year old boyfriend (“He’s got nothing between the ears. Perfect.”). Mum is a love letter to long-suffering, perma-cheerful, matriarchs; agnostically questioning family life’s unspoken protocols, yet rarely less than well acted, and – often – brutally funny. Daniel Dawkins

6) Kirby Star Allies is what you need to tide you over until Super Smash Bros. comes to Switch

Nintendo might have officially announced that a Smash Bros. game is coming to Switch this year, but no doubt it’s probably not coming until the end of the year, and there are still concerns about whether it’s a port or a brand new game. Until then though, there is a way to get brawling on Switch and it comes in the form of Kirby Star Allies. Half the game is your classic side-scrolling Kirby action, but you can play with up to three friends and all kit yourself out with various abilities and skills that can be comboed up together. Then, later on you’ll be tasked with defeating bosses four on one, which is where things gets very Super Smash Bros. indeed. It might not quite scratch that Super Smash Bros. itch, but the intense four-player action, combined with platforming and puzzle solving is utterly fantastic on Switch. I’ve heard of worse ways to waste a Sunday afternoon. Sam Loveridge

What: Kirby Star Allies
Where: Nintendo Switch
When: Out now

As Axl Rose's opening strains of the Guns 'n' Roses classic track welcome you back to Paradise City, it’s hard to believe that it’s been 10 years since Burnout Paradise first launched. We all have rose-tinted memories of how nice and shiny it looked back then, but this time it's the real deal - a graphical overhaul and high-res textures in 1080p native on standard consoles, and eye-straining 4K at 60fps on PlayStation 4 Pro and Xbox One X. Some may argue that Paradise moved too far away from the original Burnout formula, however the slick interface for easy drop in / drop out events and challenges means you've always got new and interesting things to do as you zoom around the city. In addition to the original free roaming street racing action, the Remastered edition includes the eight main DLC packs - adding a ton of extra cars, bikes, and the legendary Big Surf Island expansion full of crazy jumps and stunts to complete. Couple that with hundreds of races and challenges to beat, plus billboards, smash gates and jumps to discover, there's enough content in Burnout Paradise Remastered to keep you busy for months. Iain Wilson

What: Burnout Paradise Remastered
Where: PS4 and Xbox One
When: Out now

It’s quite possible you’re a little Assassin’s Creed fatigued by now. After years of iterative releases, even Assassin's Creed Origins - which is a very fresh game - feels like something we’ve seen and done before. Having said all that, one of the most interesting game releases this week is Assassin’s Creed Rogue on current-gen consoles. By all accounts it’s a damn good game - secretly one of the best in the AC series - and it resolves plenty of plot threads left dangling by the rest of the core entries. Sadly, few experienced it first time around because it appeared at the same time as Black Flag. While Black Flag was busy showing off all the shiny on the new generation of consoles (it was a PS4 launch game), Rogue was pretty much sent out to die on the last-gen seas. Shame - it’s a damn good adventure that tells one of the best Assassin’s Creed stories in the whole series. And in that way, it could be the cure for Hidden Blade malaise - especially as it actually tells the tale from a Templar perspective. Rogue is a great chance to see Assassin’s Creed from a slightly fresh perspective, and a reminder of what made the franchise great when it wasn’t beholden to the most cutting edge tech. In many ways Rogue had to work harder because it was confined to PS3 and Xbox 360. Now that it has been remastered, hopefully many more will see why it’s considered a hidden gem in one of gaming’s most popular franchises… Andy Hartup

What: Assassin’s Creed Rogue Remastered
Where: PS4 and Xbox 360
When: Available now