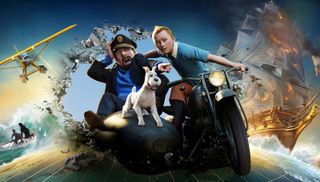 It's been five years since Steven Spielberg directed The Adventures of Tintin, a modest hit which earned $374 million worldwide. It was meant to be the first of three movies - with Peter Jackson taking over directorial duties for the sequels - but Jackson's Hobbit trilogy significantly delayed Tintin 2.

Spielberg recently gave an update on the status of the movie, and thankfully it sounds like it's still happening; "Peter was so busy with The Hobbit that it took him away from Tintin”, he said to Time Out New Zealand, "and he’s doing another film for my company now. It’s a secret, nobody knows about it. Then after that he’ll do Tintin".

Even though I wasn't all that familiar with the character beforehand, I really enjoyed The Adventures of Tintin; It was a fun, colourful adventure with some typically fantastic motion capture work from Andy Serkis. It's that last element that means Tintin 2 is probably still a long way away at this point, especially when you factor in Serkis' busy schedule. Here's hoping he and Jackson find the time to bring Tintin and Captain Haddock to life once again.