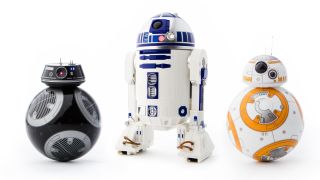 Force Friday 2 is here! All the big Star Wars: The Last Jedi toys and gadgets have arrived to tempt you. But what should you be saving up for or adding to your Christmas list? We've had a sneak preview of the toys to come and here's our picks of the best Force Friday reveals that are available to pre-order and order right now.

Read more: The best Star Wars merchandise in the galaxy

Yes, these are the droids you’re looking for. If you thought Sphero’s BB-8 was cute, it’s time to go to the Dark Side and invest in the villainous - but just as adorable - BB-9E. Complete with all the right sounds, which are of course far more evil than its white and orange counterpart, BB-9E can be controlled via your phone. He even comes with an AR experience for you to see inside digital recreations of select Star Wars ships, one of which is Snoke’s Star Destroyer.

Also to tempt your wallet is the equally ridiculously charming R2-D2, complete with authentic movement and iconic beeps that come from an inbuilt speaker instead of the one on your phone. Not only does Artoo wheel around happily, he can switch to tripod mode and even waddle around your floor. Just like BB-9E, R2-D2 comes with his own exclusive AR environments to explore. The Millennium Falcon and Obi Wan’s home will be yours to uncover on your phone. What do you mean you can’t justify a remote control toy to visit a digital house…?

If on screen speeder chasers and droid battles just aren’t enough for your gravity defying soul, it might be time to invest in these impressive Laser Battle Drones from Propel. Including the T-65, X-Wing Starfighter, and 74-Z speeder bike, these slick quadrocopters can travel at up to a ridiculous 50km/h.

Plus, not only will the companion app train you to be the best pilot, you can compete against the rest of the world via inbuilt tracking technology. 34 training missions await in the companion app and it sounds like you’ll probably need them to take on other players mid air. Corkscrew rolls and 'innovative reverse propulsion drone technology' await to give you true thrills as you battle your friends in real time. Numbered collector's editions are available exclusively from John Lewis in the UK. Happy flying.

Did you really think there could be a new Star Wars movie without any Funko Pops? Collectors prepare to buy a whole new cabinet for Funko’s positively intimidating array of traditional models and adorable bobbleheads known as Wobblers. From Porgs with nodding heads to First Order Executioners, the tie ins for The Last Jedi are catnip for Star Wars fans. Throw in the Porg carrying Chewie - I can't even - as well as new Poe Dameron, Supreme Leader Snoke, Praetorian Guards and all new Rey and Kylo Ren figures and Funko has us well and truly covered when it comes to Jedi-related desk toys.

That's not all though. Star Wars water bottles, lanyards and blind bags are on the way, as well as adorable Pop pens but the big draw is the new range of Galactic plushies. These include squishable droids, Stormtroopers and, of course, squee-induing Porgs. Check out the Funko blog to see all the cute exclusives that you'll find scattered across multiple retailers like your very own potentially very expensive collectibles mission.

If you've always wanted to know what it feels like to be a Jedi but stay in the safety of your own living room, it turns out that Lenovo has the answer. This impressive AR kit includes an AR headset, compatible with a selection of smartphones, a lightsaber controller and a little tracking beacon you pop on your floor. Don the headset and you'll be able to play a collection of different games. Holochess is in there if you're looking for something sedate to play on the coffee table but we all know the first thing you'll try is the lightsaber battle.

It's an impressive piece of tech. While you can still see your surroundings, a hooded Jedi appears and all you have to do is match your lightsaber to the lines that appear to guard against his attacks, and swing wildly when he lets his own guard down. Complete with sound effects, it's a ridiculous amount of fun from what I've played and while I was pretty sure I looked like an incredible Jedi, the effect from the outside might not have looked quite so impressive. Hey, at least you don't have to make your own sound effects now... You can pre-order now from the Lenovo site for £249.99 for a November delivery.

I mean, you could invest in a Sphero or you could make your very own droid, complete with sound effects and your own personalisation. Modular toy pros LittleBits have crafted a completely customisable R2-D2 droid kit that lets you put together patented electronic blocks technology that just snaps together.

Perfect for encouraging kids to code and build, the droid comes with an app where you can go on more than 16 missions across the Star Wars universe with your droid. You can even add new sound effects and control everything from an easy to use app on your phone.

The reason you should have this is very simple. It is a Porg. An adorable plushie of the creatures that live in the cliffs of Luke Skywalker's secluded rocky island, this Hasbro offering waves and flaps its charming little arms and tweets and chirps to its heart's content - or at least until its batteries wear out.

Sure, you could spent £700 on a 7500 piece Millennium Falcon, or just spent a little less on the impressive Lego First Order Heavy Assault Walker. At an impressive 13 inches tall, the walker comes with studular versions of Poe Dameron, Rey, a Resistance Trooper, First Order walker drive and a First Order Stormtrooper. Complete with fully poseable legs and an opening cockpit for minifigures this will make a perfect intimidating guard for your cup of tea at your desk.

Need something to practice swinging that lightsaber at before you take on the big leagues of the dark side? Looks like you need Wow! Stuff's remote controlled floating ball. Impressively, the little device darts away from anything that's placed underneath, letting you swing and play without even touching the ball itself. The Jedi Training remote comes with a remote control handset, batteries, and an all important USB charger. Jedis never leave the house without one of those.

There's too many gadgets that are all about screens and Bluetooth links to your smartphone. Jedi minds are surely better when they're calm, so what better than a book of Star Wars Kirigami for true peace and creativity. Paper artist Marc Hagan-Guirey has crafted 15 incredible Star Wars ships ready for you to cut and fold out of just one piece of paper. Grab a cutting board and a knife and settle your mind to build these impressive show pieces while learning a bit about the original movie technical design. There's even difficulty levels so you can make sure you're ready to build the incredible Millennium Falcon.

Ok, first off, no you can't have a full size one. This adorable Radio Flyer Luke Skywalker Landspeeder is ready for ages four and up and has a strict weight capacity of 130lbs. Unsurprisingly the very first child-sized landspeeder, this has an interactive dashboard complete with lights and movie sounds and a 5mph driving speed. I'm not sure how many speeder races your CHILD will win at that speed but they'll never look as stylish. Check out the video below to see just how delightful it is in action.

What is Force Friday 2?

Are you ready to, errr, bring your Rey game? It's only a matter of months before Star Wars: The Last Jedi arrives in cinemas so midichlorian fever is hotting up. To officially kickstart the madness, Star Wars Force Friday 2 is a global three-day celebration of all Star Wars toys and products. Stacks of brand new Star Wars: The Last Jedi collectibles, books, and clothes will all go on sale the second the clock ticks over to 12:01am on September 1.

The first Force Friday took place back in 2015 before the release of Star Wars: The Force Awakens and was a global success. The celebration is even bigger this year with retailers and Disney revealing exclusive toys and Force Friday only offers. Remember Sphero's remote control BB-8? That was a success story from the original Force Friday so expect some must-have items that'll definitely be impossible to buy before Christmas.

“Toys play a unique role in the Star Wars universe, and we’re proud to have been part of that incredible legacy for the past 40 years. The new line for The Last Jedi is our most innovative yet, and we’re excited to unveil it on Force Friday II,” says Samantha Lomow, senior vice president at Hasbro as part of the Force Friday 2 reveal post on StarWars.com.

When is Force Friday 2?

When does Star Wars Christmas kick off? Star Wars Force Friday 2 is Friday this week, September 1. All deals kick off globally at 12:01am and the festivities will continue until September 3.

What can we expect from Force Friday 2?

Put simply. Toys. Planets of toys. Force Friday 2 will deliver the full range of Last Jedi collectibles including costumes, weapons, and all kinds of other new-fangled gadgets and tech. The above inspiring Rey video comes from Target who have a full dedicated Star Wars Force Friday section ready for launch on Friday. We've already seen a leaked Last Jedi Canto Bight Police Speeder, which might just tease a speeder chase across the casino city of Cantonica so there'll be plenty more movie reveals when everything lands on shelves.

Shops across both the UK and the US are opening at 12:01am to celebrate the launch of the toys including Toys 'R' Us and John Lewis on Oxford Street in London. John Lewis is opening its doors to let people buy and try out the latest toys, but also to pick up a complimentary beverage in a recreated Cantina to get truly in the Star Wars mood. Blue milk anyone?

But it's not all just toys and tech, you can currently download the official Star Wars app where a new character will be revealed as part of Force Friday celebrations. The app currently has an AR treasure hunt that means that if you're in the vicinity of a selection of global landmarks you can hold your phone in the right direction and catch a slice of AR Star Wars action as a Star Destroyer and two TIE fighters fly overhead. London's Coca Cola London Eye is in there, as is the Golden Gate Bridge, the Hollywood Sign and Central Park. 20 landmarks have been included globally and each one has the same scene.

This is only the beginning of what the app will offer though. “This Force Friday II weekend, we’re inviting fans and families to join the Resistance and help ‘Find the Force’ in our global augmented reality treasure hunt taking place across more than 20,000 retail locations. We’re kicking the event off with an extra AR surprise for anyone near 20 of the world’s most iconic destinations. Just open the Star Wars App – and look up!,” says Paul Southern, Senior Vice President, Global Licensing at Lucasfilm. If you aren't close to one of these landmarks, don't worry, special QR codes are available to scan in select retailers including Toy 'R' Us to reveal The Last Jedi secrets.

That's all the juicy info for now but we'll keep you updated with the latest toys and offers as they're revealed.