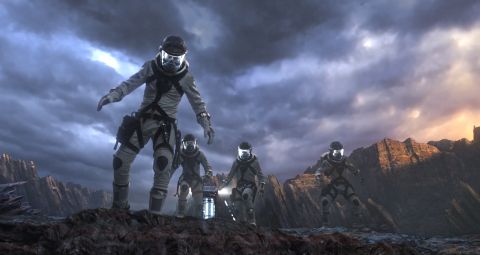 Ponderous, pretentious and, most damning of all, just not much fun. Flame off.

It all looked so good for Josh Trank a few months ago. A cult superhero flick to his name in 2012's Chronicle. A major-league Marvel movie in the can. And a Star Wars spin-off in the offing. And then came the mysterious departure from Star Wars and rumours of reshoots on said Marvel movie, whose initial cool promise became infected by bad buzz.

So, is the end result an epic fail? No, but it’s certainly no major upgrade on Tim Story's barrel-scraping 2005 effort or its Silver Surfer sequel. Echoing Spider-Man's somewhat premature 2012 reboot, Trank’s origin story brings nothing new to the party, apart from a rather muted, real-world aesthetic that counters the colourful worlds dreamed up by Stan Lee and Jack Kirby in the original Marvel comics. Such an approach might work for, say, Batman – but it doesn’t fit The Fantastic Four.

Scripted by Trank, X-Men regular Simon Kinberg and Jeremy Slater, it’s the sort of self-important, humourless story that leaves you yearning for Robert Downey Jr. to pop up with an Iron Man quip. In denial that it’s even a superhero film (“They’re not powers,” claims Kate Mara’s newly-invisible Sue Storm), it’s not until Jamie Bell’s Ben Grimm – aka rock-monster The Thing – yells his classic “clobbering time” catchphrase in the denouement that this disparate bunch even remotely resemble the Fantastic Four. Perhaps The Adolescent Arses might’ve been a better title.

The running time is a brief 99 minutes, yet Trank spends at least half of it watching our heroes brought together in a daring experiment to teleport matter. Leading the charge is Reed Richards (Miles Teller), who has been building his own such machine since the fifth grade with childhood friend Ben. Winning over Dr. Franklin Storm (Reg. E. Cathey), he’s given a scholarship to the Baxter Institute, where he’s introduced to Storm’s adopted brainiac daughter Sue and the equally smart Victor Von Doom (Toby Kebbell).

As it turns out, Reed’s early experiments have achieved similar results to those at Baxter: transporting matter to another dimension. “That place could explain the origin of our species,” marvels Dr. Storm, in one of the many dreadful save-the-world speeches poor Cathey (so good in House Of Cards) must deliver. Joined by Storm’s tearaway son Johnny (Michael B. Jordan), it's not long before Trank's team crack matter transportation – with Tim Blake Nelson’s suit threatening to take it all to those big boys at NASA.

Irked by this development, Reed, Johnny and Victor decide to test it out, to be the first humans to set foot on Planet Zero, as it gets dubbed. Bringing along old friend Ben for the ride, it doesn’t quite go to plan – what with Victor falling to his certain, ahem, doom and the others arriving back engulfed in radioactive energy. Even poor old Sue at the control desk gets a dose. Finally, almost an hour in, the Four’s freakish abilities come to the fore. By far the most evocative of these are Reed’s stretched-out limbs – a nightmarish bit of body horror.

True, The Thing looks great, but the rock-cladding seems to swallow Bell, who never really gets to grips with his character. Mara just floats around in a bubble and Jordan’s fiery Human Torch plays down his “flame on” phrase like he’s embarrassed to be here. With the quartet taken to top-secret government facility Area 57, Reed scarpering and the others learning to control their powers, it all lurches into a dreadfully dull final act, where Von Doom, all powered up from the energy-giving planet, gets a cob on.

Is it better than watching Story's cast – a bendy-bodied Ioan Gruffudd, say, or Jessica Alba in a skin-tight catsuit? Hardly. Teller, so good in Whiplash, barely lives up to the name Mr. Fantastic here, while Mara is similarly functional; that she was an orphan adopted from Kosovo is just another canon-altering trait liable to irritate the fans. At least Kebbell – albeit unrecognisable under Von Doom’s costume – brings a little menace to proceedings.

Taking us back to the bad old days when comic-book movies were second rate, there’s not much joy to be found here. It rather makes a mockery of the fact that, as our heroes step into their matter-transporting machine, the cry goes up: “We’re about to make history.” But then at least there’s the possibility that, after three failed attempts (including Roger Corman's unreleased '94 effort), the rights will be snapped up by Marvel Studios; then maybe this much-maligned superhero quartet might get the movie they deserve.

Ponderous, pretentious and, most damning of all, just not much fun. Flame off.