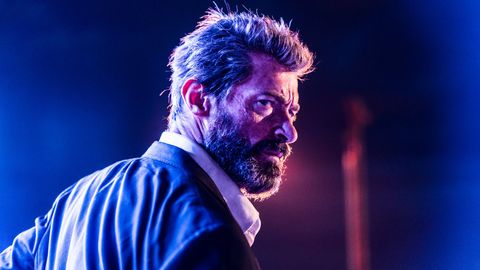 Brutal, bloody, and beautiful, Logan is the gritty, R-rated Wolverine movie we’ve all been waiting for.

Logan is old. Really fucking old. This latest incarnation of The Wolverine is battered, broken, and basically half dead when we rejoin him in the year 2029 for James Mangold’s movie. Like the world around him, he’s falling apart, desperately trying to forget the past in the bottom of a bottle. He can never really outrun his X-Men origins though and before long his past fame is bringing victims and villains alike to his door. Despite this, Logan is most definitely not an X-Men movie. Hell, it’s not even a superhero movie. More western than Marvel, it really is the gritty, R-rated Wolverine story you’ve been promised, and while it’s pretty heavy going at times, it marks itself as the definitive Logan tale.

Earning its R-rating multiple times over (the first word of dialogue is: “Fuck”), the opening fight sequence is a good indicator of what’s to come. Fans will quickly realise that Logan isn’t the same, time-heals-all-wounds superhero the X-Men movies introduced to us, but while there might be more of his blood on the floor than usual, you can still see the old fire break through at times. Set in the near future, the world is perhaps less dystopian than the trailers have lead us to believe, but that’s somehow more concerning given that we could realistically not be that far from this future. Working as a limo driver, Logan is trying to keep Professor X hidden south of the border since his brain was classified as a WMD. With the help of albino mutant Caliban (played by Stephen Merchant), he keeps Charles as drugged up as possible as he nurses his alcoholism and tries to earn enough money for the pair to buy a boat and sail away to happiness. Or, you know, less shit times.

The connection between Logan and Charles is fascinating to watch as someone who’s seen their relationship grow over multiple movies, and much credit must go to Jackman and Patrick Stewart who give their best performances of these characters yet. It’s heart-breaking to watch the once great Professor X reduced to an almost prison-like existence born out of the fear of what his sick mind might do to the world. Suffering from Alzheimer's, we see first hand what his uncontrollable seizures can do, but that doesn’t make it any easier to watch Logan shut him away. Unsurprisingly, Logan’s bedside manner leaves much to be desired and yet this is a softer, more caring Wolverine than we’ve seen before. Other versions of him would have left Charles behind or put him out of his misery. All this Logan wants to do is keep him safe and there’s more than one moment in the movie when this desire trumps all else going on.

It’s in this kind of living hell that the pair first meet Laura, played by the young Dafne Keen. She brings danger and violence back into their lives, but also purpose. She’s a young Wolverine. Not just in the sense of her familiar mutant abilities, but also in her rage and unrestrained actions. Her behaviour reminds us of a time when Logan was little more than an animal, and for Logan it’s like looking into a mirror at something he’d long forgotten about himself. As you’ve probably already realised, Laura is really X-23, a clone of Wolverine created by Dr. Zander Rice along with a host of other young mutants in an attempt to create super soldiers (isn’t it always that?). We discover that the children have escaped and trying to get to a place called Eden, which is supposedly a safe heaven for the dying mutant community, and it’s this journey that Logan gets roped into. He really, really doesn’t want to get involved, but thanks to Xavier’s continued guidance and circumstances the trio embark together.

But it’s never as simple as that, is it? There’s always bad guys and Logan’s come in the form of Donald Pierce and his Reavers. Played by Boyd Holbrook, Pierce’s opening scene is one of my favourites of the film and he makes it clear from the moment he appears on the screen that this world is built for him. The kind of character who would hate for things to go back to the way they were, he’s determined to recapture Laura but this deep-seated desire doesn’t make the character one-dimensional. In contrast to this, Richard E. Grant’s Dr. Zander Rice unfortunately is lacking in this area. With a late introduction to the movie, little screen time, and not enough explanation, this baddie doesn’t make himself relevant until the last possible moment and by that point, we really don’t care.

Of course, there is one other villain of the piece I could talk about, but I’m not going to. In fact, I’ve pretty much told you everything I’m going to about the plot. This is far from a spoiler-free review, but there were a few surprises and shocks in Logan that I didn’t see coming and there’s no way I’m going to spoil them here. What I will say is that, if you can accept that Logan isn’t really a superhero movie, but more a western about the relationship between a father and son, and a father and daughter, then you won’t be disappointed. There’s more depth to this tale than the ones that have come before, but that doesn’t mean the hallmarks of Wolverine are missing. The action is particularly breath-taking, even more so than usual, now the movie can really let rip thanks to that R-rating. And while the slight changes in well-known characters might stray from the comics slightly, for me, it was a welcome development and one which feels much more real.

Heavy-handed at times, this is not a fun movie and you’ll leave feeling a little battered and bruised yourself. Watching Logan hobble toward his enemy rather than pounce will be a new experience for most, but one that’s worth your time. While Logan could have stood for a few more light-hearted moments to give audiences a chance to recover between catastrophes, give yourself a drink and half an hour to recover after watching, and I’m sure you’ll agree that this is the Wolverine movie you’ve been waiting for. The performances across the board are spectacular, so much so it’s hard to talk about just one, but I was especially impressed with Dafne Keen who’s obviously done a huge amount of work for someone so young. Stephen Merchant too, who I thought was a mad choice when first announced, surprised me with how easily he fit into this world. And it goes without saying that both Jackman and Stewart are the stars of this movie. Make up can only do so much to convey the pain of old age and the loss of so much. The rest was just them.

Taking a definite side-step in terms of the Wolverine story and ditching most of what we know about superhero movies in general, Logan stands out as not only a great movie, but as something which is truly different for this genre. I wouldn’t be surprised if it grates with some fans, but most will find something here to love and if you’re open to seeing a new, previously unknown Wolverine, Logan is going to stay with you for a long time.

Brutal, bloody, and beautiful, Logan is the gritty, R-rated Wolverine movie we’ve all been waiting for.