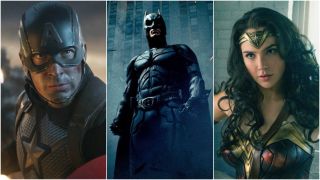 The best superhero movies are adrenaline-pumping thrill rides that see good triumph over evil and depict conflicted characters who fight for justice above all else. The are the movies that leave you racing out the cinema, punching the sky, and believing you, too, can make a difference in this cruel world.

Over the last few decades, Hollywood has started releasing new superhero movies at an accelerating rate. The number of movies listed in Marvel Phase 4  seemingly grows by the day. And, no longer content on focusing on the good guys, major studios are working on super-villain stories, like the Joker movie.

There are just too many superhero movies to choose from, but we're here to help. Below, we've listed the 25 best superhero movies of all time. How did we curate this list? We got the great minds of GamesRadar+, Total Film and SFX to submit their individual top 10 lists, and then totted up and aggregated the scores.

The result is a list that spans over four decades, and took into consideration movies even before then (sorry Adam West, your Batman outing didn't quite cut it). This list does not include purely comic book adaptations, but movies that follow a character, or characters, classed as superheroes. So, without further caveats, here are the results...

It’s not often that a truly original superhero movie  swoops in and soars past its more esteemed and well-established peers. Chronicle, though, does exactly that. Putting a spin on the found-footage genre, Josh Trank’s movie instantly sets itself apart from other superhero outings with its harrowing come-of-age story starring a trio of teenagers who gain superpowers and struggle with their newfound abilities.

Tragedy inevitably strikes and Chronicle hurtles forward at breakneck speed, the final eschewing a neat conclusion in favour of a more realistic, grounded ending that deals with how superheroes would survive (or otherwise) in the real world. Bonus points for featuring Michael B. Jordan’s first role in a superhero movie, too.

Best superhero moment: The friends flying together through the clouds is one of the few times we get to see everyone enjoying a happy, carefree moment. It’s all downhill from there.

Director Guillermo Del Toro cut his superhero teeth with Blade II, shimmied successfully into Hellboy, and then brought out the big guns, quite literally, for the sequel, The Golden Army. This isn't merely a carbon copy of the original – a trap many superhero sequels fall into. Instead, Del Toro crams this deliciously bonkers sequel with a complicated plot that nevertheless works thanks to the sheer bombasity of it.

Everything you loved from the first movie – the quippy one-liners, supporting characters, steampunk props – is still here in abundance. Ron Perlman's on top-form as Hellboy, plus the supporting cast, including Selma Blair, Doug Jones and Jeffrey Tambor, are given their fair share of screen time.

Best superhero moment: Hellboy, champ that he is, takes on the entire golden army – an ancient race of killing machines.

After Kenneth Brannagh's Shakespearean origin story and Alan Taylor's po-faced sequel, Thor was begging for a fresh start. Thank goodness, then, for Taika Waititi, director of What We Do in the Shadows and Hunt for the Wilderpeople, who turned the character around, re-imagining the God of Thunder as an arrogant, comedic mess.

Thor: Ragnarok may not be the most important MCU movie, story-wise, but the movie makes for the funniest Marvel outing to date. Chris Hemsworth, Tessa Thompson, and Jeff Goldblum are all clearly having a blast playing off the fast and loose script. Also featuring dazzlingly outlandish visuals, thanks to some impressive set design and fantastical uses of CGI, Ragnarok makes for a comic book-induced fever dream.

Best superhero moment: Hulk vs Thor... Do we have to say any more?

Directors The Russo Brothers took what could have been a bland sequel to a so-so superhero movie and made something very special with The Winter Soldier: an action flick that, instead of harkening back to the first film's Second World War adventure, brings the paranoia of the Regan Era into the 21st Century. They even cast Robert Redford.

Having now caught up with the world, Cap's back, and ready to bring down the enemy. But who's the enemy? That's the central question here, and one that leads to a jaw-dropping twist that changed the MCU (and the TV show Agents of Shield) forever.

Best superhero moment: When Steve Rogers takes out an entire elevator full of Hydra agents. "Before we get started, does anyone want to get out?"

The number of superhero movies that have successfully juggled including multiple villains can be counted on one hand (the number of failures, though, requires you to use your fingers and toes). Against the odds, Superman 2 successfully managed exactly that, pitting Christopher Reeve's Son of Krypton against numerous antagonists (Krypton criminals General Zod, Ursa and Non in addition to a returning Lex Luthor), and pulling it off in near flawless style.

This, on top of the much publicised behind-the-scenes woes (original director Richard Donner was fired over halfway through production), makes Superman 2 something of a movie miracle. How did the sequel succeed where others have since failed? By focusing on the endearing romance between Clark and Lois,giving the movie a very human heart. That, plus some of the finest physical action sequences of the 20th century.

Best superhero moment: Superman's god-like battle with General Zod in Metropolis is one for the ages.

The first superhero movie to ever receive an Oscar Best Picture nomination, Black Panther makes for a politically astute blockbuster that marks a significant step forward for diversity in Hollywood. However, even when you isolate the movie from its historical importance, Black Panther's a thrilling ensemble action flick that oozes with director Ryan Coogler's flair.

Featuring an impressive cast roster and an incredibly realised Afro-futurist setting, Black Panther features warmth and humanity. Plus, Marvel finally has a villain worthy of your attention in Michael B Jordan's Killmonger, whose raw energy is never put to waste.

With everyone so desperate for the mutants to arrive in the Marvel Cinematic Universe, fans often forget just how great those early X-Men movies are. X2 easily takes the top spot. Not only are the eponymous heroes going up against Magneto (playing with astonishing villainy by Ian McKellen), but also Brian Cox's Stryker. Mixed with a quasi-origins story for Wolverine (Hugh Jackman at his best) and some very distressing scenes in Stryker's base, you have superhero royalty right here.

Best superhero moment: Before Quicksilver stole scenes in the X-Men franchise, there was Nightcrawler. And watching the demon making his way through the White House remains a terrifying stand out moment.

Who is Batman? A tortured vigilante? Courageous hero? Wanted criminal? Or maybe, as The Lego Batman Movie makes clear, he's a privileged douchebag who's desperate to be loved? As well as being a slapstick comedy rendered in gorgeous Lego visuals and crammed with Easter eggs, The Lego Batman Movie is one of the best character studies of the Dark Knight out there.

Best superhero moment: Seeing what Bats gets up to when he's not crime-fighting, which mainly involves heating up lobster thermidor in the microwave.

Captain America: Civil War basically amounts to Avengers: 2.5. The groundwork for the rift between Tony Stark and Steve Rogers is established in the lesser Age of Ultron, and finally comes up trumps in Civil War. Who's on the right side of history? The man who wants to ensure freedom and the American way? Or the the philanthropist who desires to have a world where superheroes are held accountable?

There are still wise-cracks and silliness contained within Civil War, yet the movie takes a more serious tone than other MCU outings. The Russo Brothers do a miraculous job, somehow giving everyone their dues and introducing the world to Black Panther and a new-look Spider-Man.

Best superhero moment: That airport fight. Has there been a better Avengers tussle since?

Take Iron Man, Thor, Hulk, Black Widow, Hawkeye, and Captain America, throw them together and what do you get? Not only The Avengers, but a mammoth blockbuster that established Marvel Studios as a true powerhouse. While team-ups had been happening in the comics for years, cinema finally caught up in 2012. And, while nobody expected The Avengers to work, Joss Whedon proved critics wrong, bringing together the superheroes in seemingly effortless style.

No Avenger feels clunky or unnecessary to the story and the action sequences fly by. The Avengers fuse together into a slick machine ready to dispense justice like no other onscreen team before, and the result is thrilling.

Best superhero moment: Cap and Thor are locked in battle, but that doesn't stop Tony delivering an excellent one-liner: "Doth your mother know you stole her drapes?"

Continue to Page 2 for more of the best superhero movies