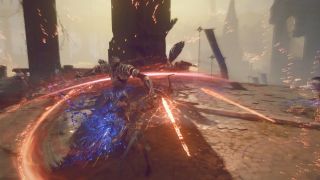 Thanks to State of Play 2019, Babylon's Fall finally has a gameplay trailer. The upcoming action game is a collaboration between PlatinumGames and SquareEnix, and looks to be as fast-paced and epic as we'd expect from the two studios. Check out the trailer below:

The gameplay trailer doesn't give us anything in terms of lore, but gives us everything in terms of sword fights against ice-conjuring baddies and creepy bugs. It looks like this trailer only takes place in one area: some type of castle that's been overtaken by plants, likely a nod to the fall of the actual city of Babylon based in southern Mesopotamia during the 6th century. It's clear that Babylon's Fall will be heavily combat-focused, as the footage shows a knight sparring with a handful of baddies, at one point using some type of magic emanating from a shield on his back to take control of the enemy's sword. Despite only seeing a single protagonist throughout, a still at the end of the trailer shows four characters standing side-by-side, all with the same glowing crest on their back - perhaps we'll be able to choose from these four main characters (which look like two men, a woman, and a creature of some sort) at the onset of Babylon's Fall.

Babylon's Fall was announced at E3 2018, and this is the first whisper of gameplay footage we've gotten since. There's still no word on the game's plot, or even its core elements, but Square Enix did release a statement along with the gameplay footage that dropped during State of Play: "In our new teaser trailer, unveiled during the State of Play broadcast earlier today, take an early look at the game’s fluid action gameplay for the first time as well its striking brushstroke visual art-style delivered by the original 'Brushwork Filter'. Keep your eyes open for more information about Babylon’s Fall this summer." I'm unsure what a "Brushwork Filter" is, but if you pause the gameplay trailer at certain points you can see that the foliage looks a lot like it was painted on, with clear, obvious strokes standing out against the more computer-generated-looking elements.

That's all we've got on Babylon's Fall for now, but it looks like we'll be getting more details in (checks calendar), seven months. So stay tuned.

Until then, plan to snatch up the Bayonetta and Vanquish 4K bundle this February.