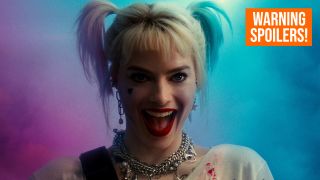 Birds of Prey has finally flown into cinemas, taking the DC Extended Universe in a colourful new direction, led by the fantabulous Harley Quinn.

But how does the movie fair? Can the new anti-hero team-up outshine the controversial Suicide Squad? Or does it fall foul of the same mistakes as David Ayer's critically mauled, Jared Leto Joker-featuring blockbuster?

On the latest episode of Inside Total Film – the podcast from our sister publication Total Film – the team go in deep on the new movie, discussing whether Harley and the girl gang deserves a sequel, and diving into that ending.

Listen to the podcast below – or head over to your favourite podcast provider (including Apple Podcasts) and search for Inside Total Film.