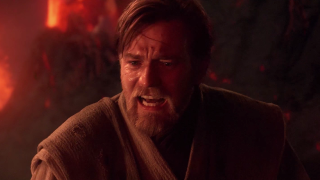 Ever since Disney and Lucasfilm announced there were three Star Wars spin-off movies in the works, fans have wondered what they would be about. Last Christmas we got Rogue One, next year we'll get a - still untitled - young Han Solo movie, but we still don't know what the last one will be. There's been hope of an Obi-Wan solo film, but Ewan McGregor pretty much shattered those dreams this week.

"There’s no official offer, and I haven’t met them about it or anything," McGregor told Entertainment Weekly. "But I’ve always said that I’d be happy to do it if they wanted to do it. It would be a good segue between the last episode of the prequels and the new episodes. I think they’ve got films to make until the 2020s, so I don’t think it’s going to happen soon if it happens at all."

Happy to do it, eh? Not going to happen soon, eh?

Oh well. At least we still have that glorious Star Wars: The Last Jedi trailer to watch again (and again). And maybe it's better that Disney leaves the Jedi behind - after all, Luke is certainly keen to.