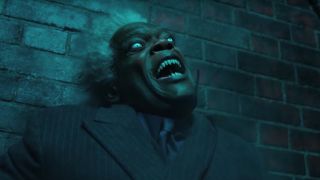 As Miss Peregrine's Home For Peculiar Children is a Tim Burton movie, there's certain things you come to expect from his filmmaking style. Ordinary people flung into extraordinary situations and vice versa is one of his favorite themes, which more often than not includes some heinous monsters. Miss Peregrine's is no different. We're being treated to that grotesque thing clearly modelled after Slenderman and the human leading all these beasties - Samuel L. Jackson's Mr. Barron.

Jackson really brings out his mean streak in this newest spot of footage, that finds the two young leads Jake and Emma facing off against him down a sewer. Luckily, these aren't ordinary kids, and Emma's powers allow Jake to escape. But not before Barron, the mean ole' bastard, gets off a slew of nasty one-liners. Check it out below:

Yep. It's not enough that he's mean. He has to have teeth filed down into points and white contacts, just to guarantee nightmares.