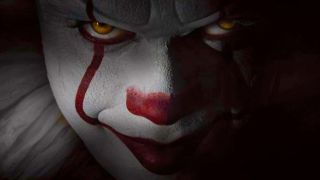 Years of development troubles are over: the It remake is in the can. And what better way to celebrate the end of filming a horror movie than by posting a hideous image to social media! Producer Barbara Muschietti marked the occasion with an apt picture of the movie's villainous clown. Albeit in a new environment:

And yes, it's a wrap on #itthemovie. Thank you amazing cast and crew for this magical journey. And thank you #stephenking for giving us this tale.

It just goes to show that no matter the scenario, Pennywise is always a sinister figure. Be it down a drain, in a sunshiney garden or you know, stuffed into a jack-in-the-box. The question is: will this toybox terror make its way into the movie? It's certainly possible. While the clown is undoubtedly a major villain of the piece, he's really just an outfit - or a 'glamour' as Stephen King calls it in the novel - worn by an ancient evil entity. So there's a chance he'll manifest in a ton of horrible ways. Wahoo!

Directed by Andres Muschietti and starring Bill Skarsgard, Finn Wolfhard, Jeremy Ray Taylor, Jaden Lieberher, Owen Teague, It opens on September 8, 2017 in the US with a UK date yet to be confirmed.