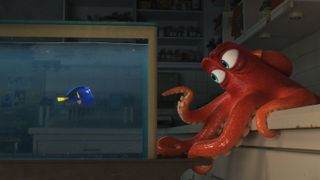 Disney have had a pretty great 2016 thus far; In addition to well-received hits Zootopia and The Jungle Book, Captain America: Civil War has already started to break records at the box office. Finding Dory will be poised for similar success when it makes its way to cinemas next month, and a new promo for the film was released to coincide with Mother's Day this past weekend.

The brief teaser - which sees Ellen Degeneres' forgetful fish remembering her Mom - manages to be both sweet and timely. Here's hoping the film itself strikes similar chords when it's finally released.

Directed by Andrew Stanton and starring Ellen DeGeneres, Albert Brooks, Diane Keaton, Eugene Levy, Willem Dafoe, and Idris Elba, Finding Dory opens in the US on June 17, 2016 and the UK on July 29, 2016.