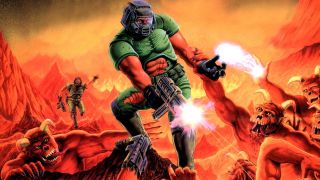 Iconic shooter Doom's plot revolves around demons, hell and space marines, but the story of the game's creation has plenty of too. So much, that actors James and Dave Franco have signed up to make a whole movie for the USA Network about it.

According to Variety Masters of Doom will be based on the David Kushner book of the same name and will tell the story about "the Lennon and McCartney of video games" John Carmack and John Romero and their troubled relationship. Tom Bissell, whose previous work includes being the lead writer on Gears of War 4, will adapt the book for the screen.

Romero reacted to the news on Twitter, calling it "pretty cool" and sharing his hopes for the casting.

This news seems pretty cool. I hope I'm played by someone of my heritage. Any suggestions? https://t.co/rfNZ96sqCB #DOOM @davidkushner pic.twitter.com/hPCG8yEHypJune 27, 2019

James and Dave Franco's Ramona Films has previously produced the film The Disaster Artist - the story of Tommy Wiseau's The Room - and has a number of other movies in the works. We don't know if the brothers plan to star in the project themselves, but James Franco has played a game developer before in Why Him? with Bryan Cranston.