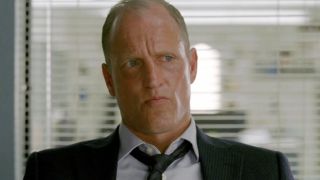 Woody Harrelson is a talented actor, able to portray a wide range of characters. And in a new interview with Collider, he took on the role of cocky Hollywood star as he discussed the upcoming young Han Solo movie. I must say, it suits him well.

"You know, any movie’s only as good as the director or in this case directors," Harrelson said. "And so I have a suspicion- because if you look at the whole, all the movies, the backlog of every one of these movies, there’s a lot of great stuff, but one might not be not as good with the writing in this or the acting in that or the directing in that... [the Han Solo film] has great actors, great directors, great script, and I really feel like we’re gonna make the best one."

Of course, we all expect a star to talk up their movie. Nobody's going to say "Oh yeah, that film I'm getting paid millions to perform in? It's total shit. I wouldn't bother." But still, for Harrelson to say that the young Han Solo film will be the best of all the Star Wars movies, he must be pretty confident in its quality. Here's hoping he's right.