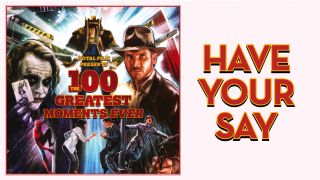 It’s more than a slight understatement to say that, over the past century or so, cinema has given us some pretty damn amazing movie moments.

Everyone has their own personal favourites, be it Stay Puft stomping into town at the end of Ghostbusters, Citizen Kane’s Rosebud reveal, Russell Crowe’s impassioned Gladiator speech, or Psycho’s shower scene, certain scenes move you, thrill you or simply make you laugh like no other.

To commemorate our sister magazine Total Film's landmark 250th issue, they've debated/discussed/squabbled at great length to round up the 100 greatest movie moments ever. And now they want to hear about your favourites!

Is it the chopper attack in Apocalypse Now? Darth Vader’s surprise paternity announcement in The Empire Strikes Back? Rocky racing up the steps? The Joker’s pencil trick in The Dark Knight? Tell us your favourite moment and why in the comments below, for a chance of being featured in the next issue of the magazine.

And if you want to stay up-to-date with all the latest film news and features from the rebooted and improved Total Film magazine, we have two special subscription offers to celebrate the 250th issue. You can get 3 issues for £5 or get a 6 month subscription and 2 Star Wars POP! Vinyls!

So whether you want to save money or get some awesome Star Wars: The Force Awakens collectibles we’ve got you covered. Now, have your say…