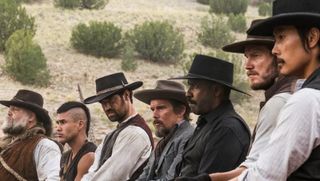 John Sturges’ classic 1960 western The Magnificent Seven - which is itself a remake of Akira Kurosawa’s Seven Samurai - is getting a modern re-imagining this year courtesy of Antoine Fuqua. The Training Day director has assembled an all-star cast for the film, and you can see all of them in action in the first trailer below...

This looks like it could be a lot of fun; Denzel Washington and Chris Pratt get the lions share of the footage here and already look to be bringing their customary swagger to their roles, and the other mercenaries are played by a refreshingly diverse cast. Antoine Fuqua has a solid track record with modern actioners too - he called the shots on The Equalizer, Olympus has Fallen, and King Arthur among others - and it'll be interesting to see what touch he brings to a western.