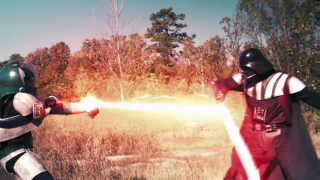 We've all played "who would win in a fight" with our friends. Usually, those imagined match-ups are between beings of equal footing and status. But what happens if you take one of cinema's most powerful bad guys - like, oh, I dunno, Darth Vader - and have him mix it up with the hero of a children's movie - again, just spitballing here, let's say Buzz Lightyear?

Well, you get this:

Not the fairest fight or most flattering portrayal of the Sith Lord, but an entertaining bout nonetheless. Especially when Buzz used his dismembered arm to slap dear Annie around a bit. Like I said in the headline: it's dumb, but a fun, self-aware kind of dumb.

Nukazooka has quite a few other nerdy fan videos on their channel if you're interested, including a particularly dark look at where Mario goes when he falls off a level. Check 'em out.