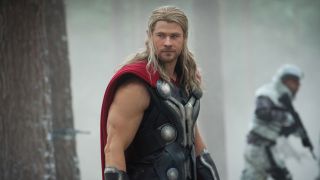 Anyone who's seen a superhero movie knows that the actors tasked with stepping into those roles tend to hit the gym beforehand. Some moreso than others. Take Huge, sorry, Hugh Jackman, for instance, he's always totally stacked as Wolverine, as is Chris Hemsworth as Marvel's god of thunder. Since 2011 he's hit the weights and chowed down on approximately 17,000 chickens to bulk up as The Avengers' muscled deity. But has he ever looked quite as jacked as he is for Thor: Ragnarok?

His caption may refer to a win for the Western Bulldogs, the Aussie football team he supports, but c'mon. This pic is all about making the rest of us feel like we'd need to spend the rest of our lives in the gym to achieve this type of perfection. You've got to hand it to him, he really does go all out at the gun show.