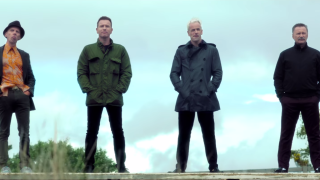 Yep, it's officially been one fifth of a century since we first saw Ewan Mcgregor's Mark Renton hurtling down Edinburgh's Princes Street to the perfect soundtrack of Iggy Pop's Lust For Life. In a year of nostalgic returns - Pokemon and Robot Wars in the last two weeks alone - it's a perfect time for director Danny Boyle to reintroduce us to the  lads from Leith in his sequel to Trainspotting.

Ewan McGregor, Ewen Bremner, Jonny Lee Miller and Robert Carlyle are all back on board for T2 as the delightful Rents, Spud, Sick Boy and Begbie respectively. The team will be unleashed in cinemas on January 27 next year. Check out the teaser trailer below.

T2 is directed by Danny Boyle and stars Ewan McGregor, Ewen Bremner, Jonny Lee Miller and Robert Carlyle. It's out in cinemas on January 27, 2017.