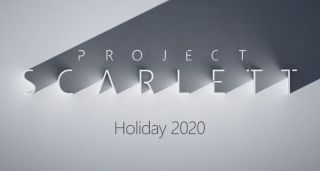 According to a new report from Windows Central, Microsoft's next-gen console - AKA Anaconda, the big brother of the Xbox Series X family - is targeting technical specifications which surpass the capabilities of the Xbox One X by upwards of 50%, and potentially as high as 200%.

The report, which cites "several sources familiar with Microsoft's plans," focuses on a few key components. Firstly, Anaconda is said to sport an eight-core CPU clocked at around 3.5GHz. The Xbox One X also has an eight-core CPU, but a markedly slower one at 2.3GHz. Secondly, where the Xbox One X had 12GB of GDDR5 RAM, 9GB of which could be allocated to games, Anaconda will supposedly "guarantee" 13GB of its 16GB GDDR6 RAM pool for games, with the remainder put towards the operating system. This, at least, lines up with the other Xbox Series X specs we've heard about already.

Windows Central's report also stresses the SSD horsepower which Microsoft has teased since Scarlett's reveal. Anaconda is said to use a proprietary NVMe SSD, which, for the layman, amounts to a custom-made model of the fastest type of commercially available solid-state drive. Where early SSDs were connected via SATA ports, NVMe (non-volatile memory express) drives go through the motherboard's PCI express port. On PC, NVMe SSDs have more than doubled the read and write speeds of SATA SSDs. For a console, this would translate to dramatically reduced or straight-up eliminated loading times.

The biggest number in the report is also one of the toughest to evaluate. Anaconda is said to boast 12 teraflops of power. For reference, the Xbox One X delivers six teraflops of power, but that's not to say Anaconda will be twice as strong as the One X.

If you've kept up with the console arms race, you've heard the term teraflop before - I'm pretty sure Microsoft said it at least 12 times in its E3 2019 presentation alone. The thing is, teraflops don't tell actually us much in a vacuum. Teraflops are used to measure a GPU's computational power, and they're derived from shader or core counts and clock speeds. Because we don't know the specifics of Anaconda's GPU, we can't verify or break down this 12 teraflop figure.

More to the point, teraflops are not the be-all, end-all measure of a console's capabilities, nor are they a good way to measure processors from different families like the Anaconda and One X GPUs. Most importantly, more teraflops doesn't always mean better performance, at least not in every situation. It's also worth noting that other components can improve overall performance regardless of a system's teraflop count. All that being said, if Anaconda does indeed end up doubling the teraflops of the One X, it will be substantially more powerful, but just how much more powerful remains to be seen.

And as always, reports like this must be qualified. Firstly, while Windows Central has accurately reported Scarlett information in the past, its sources aren't infallible, so this information shouldn't be treated as gospel. Secondly, these are merely targeted specs - as in, the numbers Microsoft is planning to reach. Targets change all the time during hardware development and don't always reflect real-world performance. We'll need official word - and more detail - from Microsoft before we can start making accurate comparisons, but this report does at least give us a technical range to ponder.

One thing's for sure: PS5 and Xbox Series X are going to be the strongest consoles we've ever seen, and by a wide margin.