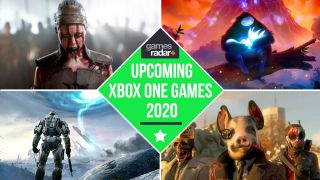 The upcoming Xbox One games list is already looking pretty awesome, and that's before we even start thinking about the next-gen Xbox Series X console and the associated upcoming Xbox Series X games that will arrive alongside it starting 'Holiday 2020'.

Some excellent games you can already get excited about include the likes of Ori and the Will of the Wisps, Doom Eternal, and Resident Evil 3 , to name a few. We've highlighted all of the upcoming Xbox One games we're most looking forward to, ordered by launch date, followed by a list of all the known Xbox One release dates. If you haven't tried the best games of 2019 or the majority of the best Xbox One games, there's a lot to pick from as you wait for the next big thing to roll around. You can also get a deeper insight into the best upcoming Xbox One games by subscribing to Official Xbox Magazine for a saving of up to 54% on a print and digital bundle.

What is it? A spiritual successor to Theme Hospital, but bigger, better and with more British humour.

What to look out for: Imagine a world where you need to go to the hospital because you're light-headed. But instead of a dizzying effect, your head's turned into a lightbulb. It's silliness like that which really brings Two Point Hospital, a spiritual successor to Theme Hospital created by some of the game's original team, and coupled with the British humour of the Two Point Radio DJs, it's a blast to play. This is a simulation game with some serious credentials.

What is it? The sequel to one of the Xbox One’s finest – and most unexpected – games to date.

What to look out for: The original game, Ori and the Blind Forest, immediately stood out among the Xbox One’s indie line-up by being distinctly not much like a stereotypical Xbox One game at all. Delicate, atmospheric, lushly presented, and dripping with dreamlike whimsy, Moon Studios’ iteration on the exploring, platforming, ability-growing model cemented by Metroid is executed with almost enough charm to be a Nintendo game itself. We don’t know a huge amount about the sequel yet – all we’ve seen is an announcement trailer at Microsoft’s  E3 2017 press conference – but we do know that it will take Ori beyond the first game’s titular tree village, and out to investigate larger mysteries in the wider world.

What is it? The sequel to the 2016 Doom reboot, but this time with more guns, gore, and heavy metal.

What to look out for: As the direct sequel to the 2016 reboot, Doom Eternal picks up where the story left off, but Bethesda promises that it's bigger and better than anything Doom has delivered before. Combat's taking a step up, with new weapons and a snazzy new grappling hook, and the story will see you jump dimensions to new locations like Mars, and Heaven! Of course, it's all in a bid to save Earth once again.

What is it? A brand new multiplayer title from the team at Ninja Theory.

What to look out: Bleeding Edge is a colourful 4v4 class-based multiplayer game, which has had several technical alphas in 2019. But, since then, it's been a bit quiet on the Bleeding Edge front. But it's coming, and it takes advantage of Ninja Theory's excellent combat prowess. Plus, the characters are pretty darn awesome.

What is it? A glorious remake of the original Resident Evil 3.

What to look out for: Think about the recent Resident Evil 2 Remake: how good it looks, how faithful a recreation it is, and yet how modern it feels. Well, now imagine the original Resident Evil 3 with such a remaking. Well, it's happening. And, you're also getting a brand new 4v1 multiplayer where four players are the Survivors trying to escape, and one player acts as the Mastermind. As the Mastermind you try and pull off a series of experiments on the group of survivors, controlling the likes of G-Birkin and Tyrant too.

What is it? The latest in the RPG Wasteland series from inXile.

What to look out for: The fate of Arizona relies on you, and the fate of Colorado. It's weird, but roll with it. You're a desert ranger, fighting a losing battle to keep Arizona alive. And then the self-proclaimed Patriarch of Colorado gets in touch, offering you aid if you do just one thing for him - rescue his land from three of his bloodthirsty children. You'll have to travel from scorching desert to frozen mountains and start again, building a new base, finding an appropriate vehicle, and fight through a hostile wilderness. The things you'll do to save Arizona knows no bounds. This squad-based RPG features tactical combat, exploration, a reactive story, and brutal ethical decisions, and you can play in single-player or co-op.

What is it? Crystal Dynamics' own take on Marvel's Avengers.

What to look out for: Who doesn't want to be a superhero? With a cast of playable characters including Iron Man, Ms Marvel, Hulk and more, Marvel's Avengers looks super awesome. It's going to play a bit like Destiny, but with superheroes instead of Guardian classes, with multiplayer content releasing for months, if not years, after release. These might not be the faces of the MCU's Avengers, but we're intrigued to see what Crystal Dynamics does with the Marvel crew.

What is it? The Witcher meets Deus Ex in a sci-fi RPG where advanced technology has both cured and cursed humanity.

What to look out for: And you thought The Witcher was big. CD Projekt RED has already confirmed that Cyberpunk 2077 "far, far bigger" than Geralt's last hurrah, another open-world RPG taken from an unusual source - in this case a pen-and-paper role playing game last heard of a decade ago. You'll explore an open world called Night City in the first-person perspective, encountering all kinds of friendly or hostile NPCs and trying to fend for yourself in this technologically advanced future.

What is it? A new adventure set in a Greek world of mythology from the creators of Assassin's Creed Odyssey.

What to look out for: Announced at E3 2019, Gods and Monsters is a brand new storybook adventure from the team behind Assassin's Creed Odyssey, which will bring us a brand new, fantastical adventure based on the stories found in Greek mythology. The Gods of Olympus have turned to you for help, embuing you with their powers to take on the mythological creatures that have invaded the Isle of the Blessed. Saving Gods and killing Monsters is your focus, and this adventure will be wrapped up in a beautiful art style that could be one of the most interesting open-world adventures to date.

What is it? The next-gen, next stage adventure for Master Chief and co.

What to look out for: It's still a while off, but 343 Industries' follow-up to 2015's Halo 5 is coming, and it'll be a simultaneous release on Xbox One and Project Scarlett. The first Halo Infinite trailer almost seems to suggest that Master Chief's next adventure will of touches of MMO and sandbox gameplay, or at least be more open-ended. We certainly can't wait.

What is it? A surprise sequel to Hellblade coming to Xbox Series X.

What to look out for: Okay, so technically this is really for our list of upcoming Xbox Series X games, but we have a sneaking suspicion it may well also launch across the Xbox One family too. The sequel, called Senua's Saga: Hellblade 2 is a bit of a mystery right now, as all we've had for it is a slightly unnerving teaser trailer, which involves face paint / blood, scary singing and chanting, and more disembodied arms with fingers trying to grab at you. Nightmarish. It all suggests another harrowing journey for our heroine.

Turn to page 2 for more upcoming Xbox One games for 2020 and beyond...