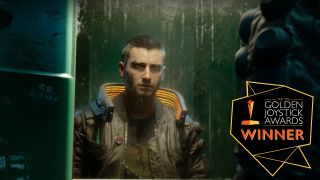 It's the second year running that CD Projekt Red's neon-hued role player Cyberpunk 2077 has won the award, with fans desperate to start their journey in Night City as soon as possible. As announced at E3 (alongside Keanu Reeves involvement in the game), Cyberpunk 2077 will launch on April 16, 2020.

What does winning this award mean to CD Projekt Red board member Michael Nowakowski? "It means we have great expectations," he says, "The team knows that very well, they're hard at work back home." And the feeling of winning it two years in a row? "That's why I said great expectations," Nowakowski laughs. "We now have a date set, and we know when that ship is sailing so I'd say each day we're closer to that moment when we're actually going to release the game to the players. Like I said on that stage, hopefully you all love it."

There were plenty of games vying for this year's Most Wanted award, with 2017's winner The Last of Us Part II among them. On top of that, Halo Infinite was also vying for votes, alongside Marvel's Avengers. The full list of nominees were:

While we now patient wait for Cyberpunk 2077's release, you can get an exclusive behind-the-scenes look at the making of Cyberpunk 2077 that aired during the Golden Joystick Awards pre-show here.